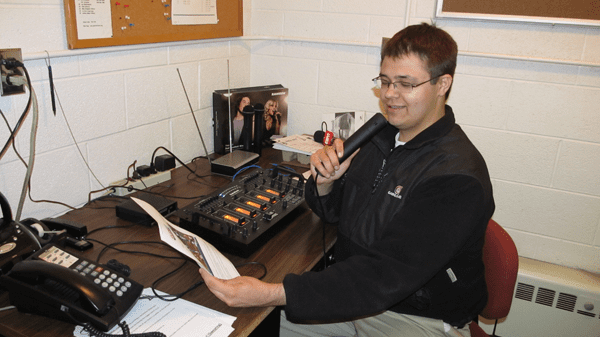 Photo by Sue Suchyta
Gabriel Richard High School senior Christopher Trusk, 17, of Huron Township created a low powered radio station, WWGR-FM 100.9, for the school as his Eagle Boy Scout project. The station broadcasts school announcements live from 2:20 p.m. to 2:50 p.m. school days to parents waiting in their vehicles in the parking lot to pick up students after school.

By SUE SUCHYTA
Times-Herald Newspapers
RIVERVIEW – Whether as solid as brick, or as nebulous as radio waves, the Eagle Scout projects of two Gabriel Richard High School seniors have one thing in common: both benefit the school.

Mohr oversaw the planning and construction of a combination storage shed and porch-like covered pavilion for the outdoor track and field area, which gives scorers, officials and their equipment protection from the elements, and allows track and field equipment to be stored securely separate from that of other sports.

Trusk created a low-powered radio station, WWGR-FM 100.9, to broadcast school announcements live from 2:20 p.m. to 2:50 p.m. on school days to parents waiting in their vehicles in the school parking lot to pick up students after dismissal.

Gabriel Richard admissions director Mary Lehnart said Eagle Scout projects are a tremendous asset to the school, and she actively recruits local Boy Scouts as they advance through their ranks.

“We’re saying if you aspire to be an Eagle Scout we open our arms and say, ‘Come to GR,’” Lehnart said. “‘Let’s help you attain your goals.’”

Lehnart said the radio station broadcast serves as an outreach to parents.

For now, there is one daily broadcast. Trusk said eventually GR might digitally repeat announcements through the radio station for a longer time-period after school, or through a podcast, or they might post more extensive written announcements on a website. (He said abbreviated announcements are on the school website at www.gabrielrichard.org.)

Trusk said the radio station idea germinated when Lehnart complimented his voiceover work during student announcements on the public address system during his junior year. (This school year, teachers at the school read announcements to students during homeroom, and P.A. announcements are no longer a daily practice.)

When Lehnart further heard that Trusk and his father had built a small radio transmitter at home, she encouraged him to create a low-powered radio station for the school.

Trusk said Lehnart felt the radio station announcements let the school connect with parents on a more personal level, letting them know when events are occurring.

“Not every student goes home and tells their mom exactly what’s happening that week (at school),” Trusk said.

Trusk said the station signal reaches throughout most of the school campus, and as a low-powered FM transmitter, it does not require approval by the Federal Communications Commission as long as it does not interfere with established radio frequencies.

Trusk said he and his father donated some of the radio station equipment, and Lehnert used some of her budget for other materials, like a roof-mounted antenna and a mixer.

He said he trained 17 student volunteers to share announcing and engineering duties for the broadcasting season, which began Oct. 1 and will run through May 1. He said he operated last school year with a comparatively small crew of eight students.

He said he hopes to have a structure in place when he graduates this spring that will enable other students to continue with the radio station.

“I think it’s really cool that GR now has a radio station,” Trusk said. “There’s not a lot of high schools that can say that, and hopefully this will (lead) to a class in electronics or broadcasting for more interested students.”

Trusk said people have told him the radio station is a unique Eagle project. Likewise, Mohr has received positive feedback on his track and field pavilion and storage structure project.

“I’ve gotten so many people to say that it’s just over and beyond what they’ve ever seen for an Eagle Scout project,” Mohr said, “and how proud they are that I can even accomplish something like that.”

Mohr said he launched his project idea during a meeting with his track coach, who agreed it would be a good idea to have both a storage area for track equipment separate from the football and soccer equipment, and a sheltered area for meet timers and scorekeepers to shield them and their equipment from adverse weather. In the past officials used a tent on the field.

“The wind would come and blow papers all over the place and rain would get in,” Mohr said. “They have all the paper and electronics under there and they needed a safer place for it.”

He said the structure includes a storage area that is 6 feet by 20 feet and completely enclosed from the elements, and an open-air part that is 10 feet by 20 feet, with a clear view of the track.

“All the timers can be back there and they can see when (runners) pass the finish line,” Mohr said, “and it’s just open to the whole field.”

He raised money last May by hosting a comedy fundraiser through Portofino’s, which runs comedy fundraisers at seven southeastern Michigan locations, including Epicurean House Banquet Center in Trenton, which Mohr used. He said parents of Gabriel Richard and his Scout troop, as well as members of his home parish, St. Joseph Catholic Church in Trenton, supported the fundraiser.

Mohr said a classmate’s electrician father donated time and equipment, and Matthew Guinta, an Eagle Scout and a graduate of the School of Architecture at University of Detroit Mercy, who is now an architectural designer, designed the structure.

He said getting all the permits approved by Riverview city officials was the most difficult part of the project.

The completed structure is currently undergoing finish painting and workers are preparing to lay down paver stones, Mohr said.

Mohr said based on his experience, he would advise future Eagle Scout candidates to persevere when working on their projects.

“Just don’t give up,” Mohr said. “It’s a long process and there are times when it’s hard, but it’s all worth it in the end. It will all be worth it.”