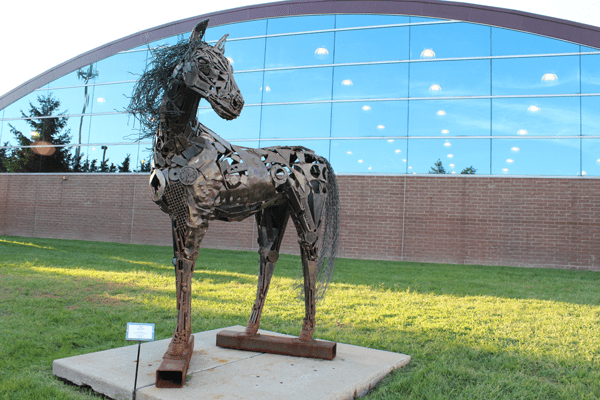 Photo courtesy of Leslie Herrick/Dearborn Community Fund
“Gaze,” the horse sculpture at the south entrance to the Ford Community & Performing Arts Center, will stay in Dearborn permanently after the selling price of $16,000 was matched by the Kenwal Steel Corp. last week.

By BOB OLIVER
Times-Herald Newspapers
DEARBORN — The city’s “resident mustang” may not be going anywhere after all, as a pledge from the Kenwal Steel Corp. will keep the artwork in the city permanently.

“Gaze,” the horse sculpture at the south entrance to the Ford Community & Performing Arts Center, was going to be taken down and sold to the city of Hastings if the Dearborn Community Fund could not raise $16,000 through donations to match the Hastings offer by Oct. 14.

DCF Executive Director EmmaJean Woodyard said the DCF was informed about the offer for the piece in late September and was able to convince the agent representing the artist to give it some time to raise the funds.

After about three weeks of accepting donations, the DCF was still far from having the amount needed to match the Hastings offer.

“We had a way to go,” Woodyard said. “We put the word out and received interest from the community, but it was a short turnaround and it looked like we werent going to make it.”

Then Kenwal Steel President and Chief Operating Officer David Bazzy, who is also on the city council, was informed of the fundraising by his wife and asked the company if it would be interested in getting involved.

“I was unaware that any of this was going on,” Bazzy said. “My wife brought it to my attention and asked if there was anything that could be done to keep the artwork in Dearborn.”

Bazzy said he then presented Kenwal board members with information about the sculpture and they collectively decided that the best thing to do was to buy the work from its owner and donate it to the city.

“People like the statue,” Bazzy said. “It’s majestic and it fits the spirit of Dearborn. Now our residents can enjoy it forever.”

Woodyard said Bazzy contacted her twice about the artwork. The first time was to see where the DCF was in terms of fundraising and the second to tell her that Kenwal was interested in sponsoring the sculpture.

“The sponsorship was absolutely a surprise, but it was wonderful,” Woodyard said. “We really felt that it was a longshot, but now it will have a permanent home here.”

“Gaze” has been on display since April 2012 and was supposed to remain in place for one year but the city asked to keep it another year as part of the city’s Art in Public Places – Midwest Sculpture Initiative.

The initiative is a project of the DCF with support from the east and west Dearborn downtown development authorities.

The sculpture is made out of recycled materials and found objects was created by artist James Oleson of Florida.