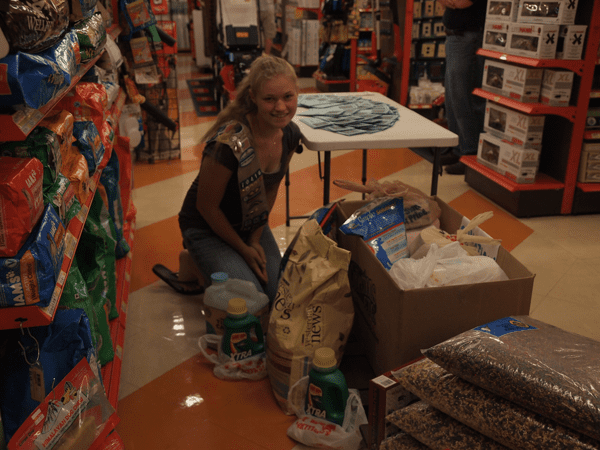 Photo courtesy of Melodie Little
Autumn Little, 18, of Taylor, a recipient of the Girl Scout Gold Award, the highest achievement within Girl Scouts of the United States of America, sorts donations at an animal advocacy event she held as part of her project. The event, held at Hood’s Hardware in Wyandotte July 27, featured local experts who talked about the importance of spaying and neutering pets, strays and feral dogs and cats to reduce over-population.

In addition to creating a sustainable pamphlet listing low cost and free spay and neuter source providers for pets, strays and feral dogs and cats, Little coordinated a free event featuring adoptable animals and local experts, who spoke about the importance of spaying and neutering to reduce dog and cat over-population.

The event — July 27 at Hood’s Hardware, 1844 Ford Ave. in Wyandotte — featured speakers from the Precious Animal Welfare Society Clinic, Shelter to Home, PAWS of Michigan and the Wyandotte Animal Pound. They spoke about the importance of spaying and neutering animals to stop over-population. Some clinics also help control feral cat population through the trap, neuter, return method.

Websites for local animal advocate groups include http://thepawsclinic.com and http://sheltertohome.com, with more listed in the pamphlet Little created.

To help ensure the sustainability of her animal welfare project — a requirement for every potential Gold Award — Little put an email contact address, [email protected], on each pamphlet so people can request one for themselves, or more when a distribution site runs low.

Little said she still has some donations to deliver to local animal welfare agencies, and she would like to get her spay and neuter resource pamphlets in more locations, like local libraries.

Friends who helped her distribute event fliers and her animal welfare pamphlets now have more insight into what teenage girls can achieve when working toward a Gold Award, Little said.

“I think they understand to an extent how awesome it is and what amazing things Girl Scouts can do,” she said.

While she has never hesitated to take on a leadership role or a challenging project in the past, she said that working toward her Gold Award taught her how to push her boundaries.

“I never really had a problem with it,” Little said. “I mean, sure, no teenager wants to sit down and do that much work, but it has definitely helped me a lot.”

Her two older brothers achieved Eagle Scout rank, and her younger brother is about to start his Eagle Scout project.

Her mother, Melodie Little, said Autumn sets her mind to things and likes to finish them.

“I think there was an influence that (she had) seen how far (her) brothers went,” Melodie Little said, “And I have to say this was a lot harder than an Eagle project.”

Both women credit animal advocate volunteers from area groups and Patty Markiecki, Autumn Little’s mentor from Girl Scouts of Southeastern Michigan, for a tremendous amount of advice and help.

Autumn Little said she would tell younger Girl Scouts thinking about pursuing a Gold Award project that it is a lot of work but the experience is personally very satisfying.

“I felt so good about myself and so happy that I got to help animals,” she said. “I am a really big animal lover.”

As both a mother and her daughter’s Scout leader, Melodie Little said she would encourage teenage Girl Scouts to start their Gold Award project as early as possible to give themselves more time to complete it, and to work closely with their council mentor.

Melodie Little said her proudest moment came when she heard animal advocate volunteers and others thank her daughter for putting on the spay and neuter information event.

“She worked really hard and stressed really hard,” Melodie Little said. “And then to have other people say, ‘Thank you for doing this. The word you’re getting out there is something that needs to be said.’”

“It helped me become way more independent because I couldn’t just have my mom doing all my work for me,” she said. “I had to do it, so it taught me that (there is) so much more that I didn’t even know I could do. I am not usually one to just go out there and broadcast stuff, so it definitely helped me a lot with my social skills, but I have said that about Girl Scouts my whole life.”

Autumn Little said she no longer has a problem giving speeches.

“It was just so good to feel that I did all that,” she said.