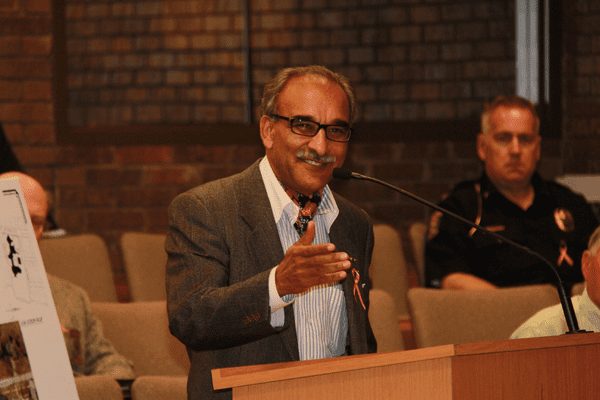 Photos courtesy Dwight Angell/Henry Ford Hospital
Property owner Iqbal Nasir addresses the city council as plans are announced for a medical mall at the site of the former Riverside Hospital. Iqbal, the city and Henry Ford Health Systems have been negotiating development proposals for years, and the property has sat vacant since the hospital closed in 2002.

By JAMES MITCHELL
Sunday Times Newspapers
TRENTON — What has been a source of frustration, a local eyesore and magnet for trouble was cleared last week for redevelopment as a medical mall.

“It took getting everyone in one room in August to get things done,” Wagner said, citing Mayor Kyle Stack and Councilman Bill LeFevre as spearheading the city’s interests. At one point U.S. Rep. John Dingell (D-Dearborn) offered to mediate if the parties had been unable to reach a solution soon.

The land has sat unused since the 2002 closure of Riverside Osteopathic Hospital, and had changed hands several times before Nasir bought the grounds and buildings in 2009, a purchase that came with deed restrictions that medical offices were acceptable but the property could not be used as a hospital.

Nasir’s initial vision of a nursing home gave way to various proposals since, during which time the West Jefferson property suffered vandalism, inspired urban legends and — to the neighborhood residents — presented a dangerous eyesore.

“The city is pleased that the project will go forward,” Wagner said. “And that the people in the adjoining neighborhood will see something going on. It won’t be unoccupied, it will create jobs, a tax base and traffic for the downtown area.”

As presented Monday, the medical mall will include doctor’s offices, a pharmacy and a center with basic medical diagnostic imaging. Construction was expected to start immediately on the project. Some advance work had been done in July when demolition work tore down the complex’s boiler room and church house.