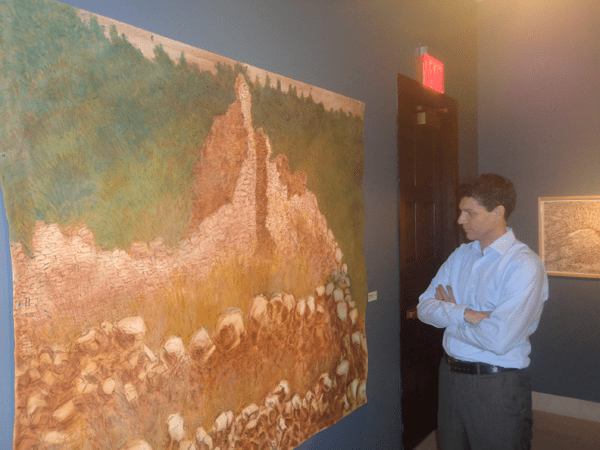 Photo by Bob Oliver
Arab American National Museum Director Devon Akmon reviews a piece titled “Remember” in the “John Halaka: Landscapes of Desire” exhibit in the museum. Akmon was included in Crain’s Detroit Business’ 40 Under 40 list for 2013. The list recognizes individuals under age 40 for their financial impact and leadership in their communities.

By BOB OLIVER
Times-Herald Newspapers
DEARBORN — Arab American National Museum Director Devon Akmon has been included in Crain’s Detroit Business 2013 Class of 40 Under 40. The announcement was made by the magazine on Oct. 6.

“It was quite a surprise,” Akmon said. “It’s really a great honor to be included with the other 39 individuals being recognized for their work.”

The annual list highlights “young achievers” based on factors such as the individual’s financial impact and leadership in the community.

Akmon was highlighted for securing accreditation for the AANM from the American Alliance of Museums last month.

The accreditation is considered the “gold standard” for museums and only 1,005 of the estimated 17,500 museums in the United States are accredited by the AAM and only 25 museums are in Michigan.

Museums receiving the accreditation are noted in the industry for their sound board governance, planning, financial stability and operations.

Akmon was also noted for the current expansion that the museum is undergoing and for his goal to increase the museum’s endowment from its current $4.3 million to $10 million by 2017.

The expansion is 4,200 square feet of space that the museum will gain by rehabilitating the two buildings immediately to the east of the museum on Michigan Avenue.

The rehabilitation is being funded with approximately $385,000 from the U.S. Department of Housing and Urban Development and will give the museum more exhibition or performance space.

Akmon said it is odd to be singled out for the achievements of the museum because he is only one member of a team.

“Everything we do at the museum is a team effort,” Akmon said. “It takes the entire team to make this happen and I think the recognition we have received honors the hard work of all the people who work here.”

Akmon has been with the museum since it first opened in 2005, when he was the curator of community history.

As curator, he supervised exhibition development and helped create a cell phone-based audio tour of the museum for visitors. He also worked online through social networks to expand the museum’s audience.

Akmon also has been credited for leading the AANM’s application for Smithsonian Institution affiliation, which it received in 2007.

In 2009, Akmon became the deputy director and oversaw the daily operations at the museum for the year leading up to his promotion to director in July.

Crain’s plans to honor this year’s “40 Under 40” recipients Nov. 6 at Emagine theater in Royal Oak, which Akmon said he plans on attending.