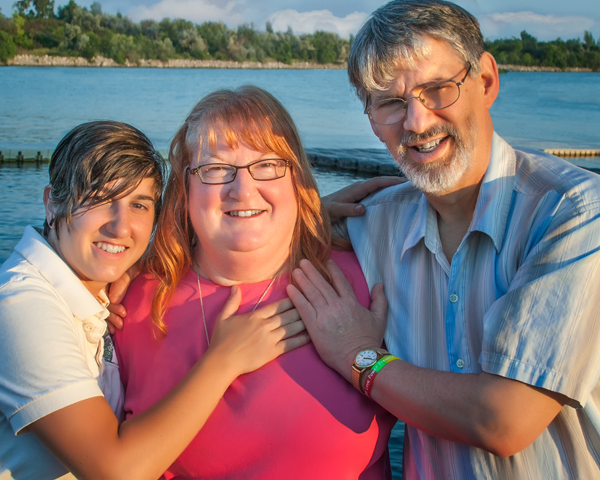 Photo courtesy of Sanda Cook/Purple Frog Photography
Virginia Capotosto (center), 12-year breast cancer survivor, her husband, Mike (right), and daughter, Ashley, celebrate the “heart” and strength she showed through the fight against breast cancer. The Capotosto family was invited to a survivor photo shoot around Wyandotte by Purple Frog Photography recently. Virginia was excited that Wyandotte would host events to celebrate cancer survivors and said it’s “upsetting that more cities don’t celebrate or acknowledge cancer survivors.” She said events like this are very important for survivors and allow others to learn about the disease.

By GABRIEL GOODWIN
Sunday Times Newspapers
LINCOLN PARK — A breast cancer survivor braved the fight against the disease using an inner strength she did not realize she had until it was over.

Virginia Capotosto is a 12-year cancer survivor who took life as it came. She developed an “it is what it is” attitude early on and learned to take every situation in stride and not look back. Her father taught her she needed to be strong and not rely on others to help her, so she said she handled everything on her own.

For her, facing cancer was no different because she was used to doing everything for herself and her family.

“I had to do this on my own,” she said. “Back then, breast cancer was discussed differently. It was still a hush-hush topic. People knew about cancer, but no one wanted to talk about it. You weren’t supposed to publicize it because everyone felt it was a private matter. So, it just became something else I had to deal with in my life.”

Her grandmother, aunt and countless other relatives had cancer, she said, so it was part of her family history. They got the disease at an early age, which she said led to her getting a baseline mammogram at age 25, then a mammogram every year after that. She said her doctor was very mindful of her family history along with her type of breasts because those are two major factors in early detection and recommended yearly mammograms.

“The type of breasts I had was the reason I got checked every year,” she said. “I would begin to think I found something, when in actuality there was nothing there. They are large, but they were dense, so that right there was another reason I had a false sense of security.”

She has always been “very mindful” of getting mammograms and said she was glad to get them because doctors found her cancer after a May 18, 2001, mammogram.

“The year before nothing showed up, but during my next check they happened to find something changed,” Capotosto said. “That is what started worrying me. Going into it, I didn’t anticipate anything out of the ordinary, but the technician kept saying, ‘Let’s get one more view. We need one more view,’ while they were concentrating on the right breast. At that moment, I began to get nervous and thought, ‘This isn’t good.’”

Before Capotosto could leave, a technician grabbed her by the shoulder and said, “I think you’d better call your doctor on Monday.”

She said that was the moment she knew she had cancer.

“The doctor didn’t need to tell me. I already knew,” she said. “But I called Monday morning anyway.”

She still clearly remembered the first phone call was short. She explained to them the scenario from the previous Saturday and was told they would call when there was some information available. That call came a few hours later.

“I was at work when I got the call,” she said. “He asked me if I could take it in another room. So I did. I remember he said to me, ‘It was what we thought it was. It’s cancer.’ And I just lost it right then and there.”

At the time, Capotosto and her son worked together at nursing center in Woodhaven, and she remembered rushing to find him. He was the first person, in her family, to hear the news and was “at a loss for words.”

As she confided in him, he wanted to help her figure out the next steps.

The idea of cancer scared her because of the unknown, but she said she was not going to let it beat her. She remembers thinking about her children, her husband and what would happen to them if she lost her battle.

She said her son was 17 years old and a recent high school graduate at the time, so she didn’t expect him to understand the situation or want him to spend too much time dwelling on the subject.

She said she could not bring herself to ask him for help. She also had two daughters, who were 12 and 16 years old when she was diagnosed, and a mentally-ill husband.

“I had to be here for my husband,” she said. “He has some mental issues and if something happened to me, no one was going to be here to take care of him. My job was and still is taking care of my kids. They didn’t ask to be here. I asked for them and my husband gave them to me, so that is just going to be my job until they die or I do.”

Once she came to terms with the breast cancer diagnosis, she said her thought process was: “What’s the point of crying? It’s not going to solve my problem.”

Capotosto said she was set up with a doctor almost immediately, and the doctor looked at the x-rays then told her “very bluntly” that a biopsy could be done, but it would be a waste of time because “this was obviously cancer.”

The doctor scheduled Capotosto’s first surgery right away, she said, because neither of them wanted to waste any time. A lumpectomy was done June 7 and the surgeon found two separate kinds of cancer. Another surgery was recommended to increase the margins from that surgery, which she said put her back on the operating table two weeks later.

The second surgery took six hours, she said, because they had to remove 18 nodes and there were complications with her chemo port. She said the first port they were going to use was dropped on the floor and considered contaminated, so another one had to be found and used.

Throughout this whole ordeal, she said she kept working and never took a day off from work. She made sure to schedule any appointments before she began her shift, so they would not interfere with work.

Capotosto continued to balance work, appointments and treatments for another four years until she was fired from the nursing center in 2005. Since then, she went back to school and received two degrees — an bachelor’s degree in Health Services Administration and a associate’s degree in Health Information Coding — from Baker College.

She said focusing on the tasks at hand and the lessons she learned from her father were what helped her get through the bout with cancer.

“I didn’t let the breast cancer overwhelm my life,” she said. “I just let it go after a while and didn’t let it get to me again. I figured if I didn’t emphasize it, then it wouldn’t become a big emphasis on my life. My father always said, ‘If you can’t handle the things going on in your life then you are weak,’ so I pushed through and I told myself this (disease) is not going to beat me.”

She said it also helped to have someone cheering for her through everything because the Nancy Zammitt has become a good friend to her. Zammitt was a social worker, who worked with her at the nursing center and kept her in good spirits.

“I appreciated working with Nancy and our ongoing friendship,” she said. “She was the one person to show me genuine concern throughout the whole thing. It was the type of person she was. She always focused on the positive and was as good as gold to me.”

Capotosto does not have the same health insurance she had when she worked for the nursing center. She said the difference in treatments are like “night and day.” When she had sufficient insurance, she said the doctors looked into everything right away and began doing the necessary tests and wanted to schedule treatment and surgeries as soon as they could.

Since she lost her insurance along with her job, she said there isn’t much a hospital is willing to do. The cancer she beat 12 years ago may have come back because of the types of cancer she had, but she may never know for sure.

“I hear a lot of ‘We want to watch your progress,’ because if they say it’s cancer then they become financially responsible for the treatment,” she said. “And no hospital is going to do that.”

But whether the cancer comes back or not, she said all she can do is just to “go with the flow” because someone can’t dictate their future, just react accordingly.

“It’s just one of those things you have no control over,” she said. “I would just have to handle it like I did before. I found out through my first experience with cancer that I am stronger than I look.”