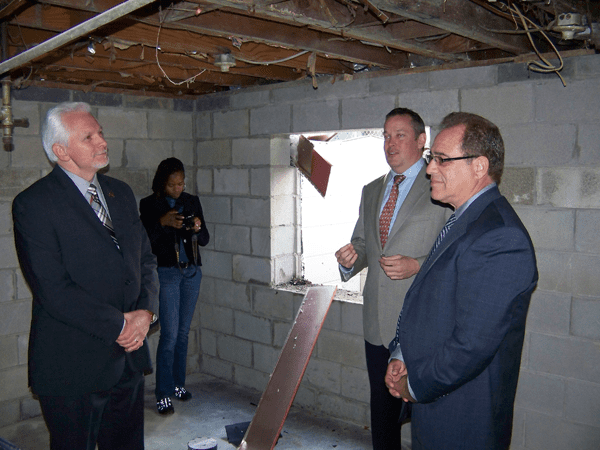 By JAMES MITCHELL
Sunday Times Newspapers
SOUTHGATE — By the time the holidays roll around, Mayor Joseph Kuspa said there will be at least one family with a new place to call “home.”

At last week’s launch of the multi-partner Green Anchors Program, Kuspa said the grant-funded project of redeveloping houses formerly owned by banks marked the beginning of a turnaround for many families and neighborhoods to come.

“Today serves as a pilot program for retro-fitting homes through grants,” Kuspa said at a press conference Wednesday before a walk-through of the Rosedale Street house.

The program began when the city applied for and won a Wayne County Neighborhood Stabilization Program grant, for which partnerships included the Michigan Suburbs Alliance and contractor Meadowlark Builders. Phase one includes the redevelopment of a vacant house, to include energy upgrades for further cost efficiencies.

Wayne County Executive Robert Ficano said the program highlights the positive steps forward that can be taken in struggling neighborhoods through cooperative projects.

“I know Southgate and its partners will have success with this,” Ficano said.

Jennifer Young, Energy Programs Manager for Michigan Suburbs Alliance, said the program’s reach can extend beyond the prospective homeowners through raised awareness of bringing residents back to vacant houses and showcasing the cost savings of energy efficiency.

“The overall goal is to create a model that can be repeated in other communities,” Young said.

Last week’s project start on Rosedale was to be followed by two other projects in the city, and crews began work on houses that are expected to welcome new residents by year’s end.