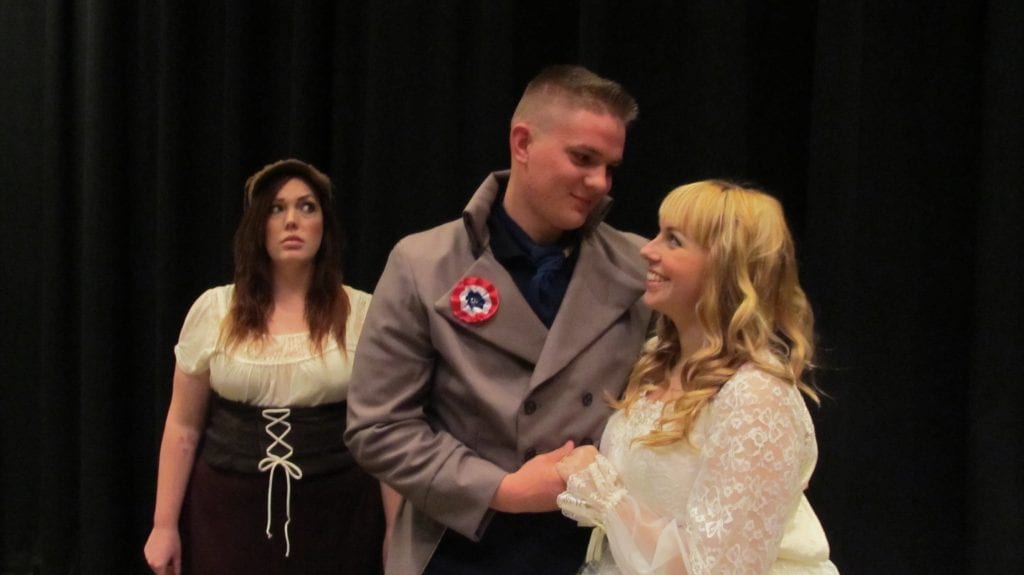 Photo by Sue Suchyta
Tamara Marla (left) of Wyandotte plays Eponine with Brendun Deer of Melvindale as Marius and Megan Robertson of Carleton as Cosette in the Southgate Community Players production of “Les Miserables.’” The show runs at 8 p.m. Nov. 8, 9, 15 and 16 at Davidson Middle School, 15890 Trenton Road in Southgate. For more information call 734-282-4727 or go to www.scponstage.com.

For more information, go to www.scponstage.com.
Southgate residents Christopher Rollet and Phillip Rauch direct the musical, with Tina Brow of Brownstown Township producing and Sarah Leonard of Lincoln Park serving as musical director.
Set in early 19th century France, and based on the novel by Victor Hugo, “Les Miz” is a sung-through musical with music by Claude-Michel Schonberg and original French lyrics by Alain Boublil and Jean-Marc Natel, with an English language libretto by Herbert Kretzmer.
When Jean Valjean, a French peasant, steals a loaf of bread for his sister’s starving child, he is caught and serves 19 years in jail. Upon his release, he finds the terms of his parole prevent him from ever re-entering society. With the help of a compassionate bishop, Valjean breaks his parole and assumes a new identity, making a new life for himself.
However, Valjean is still not free, since he broke the terms of his parole, earning a relentless pursuit by Javert, a police inspector. During the pursuit, Valjean meets up with a group of idealistic students during a rebellion for liberty.
Rauch said that the amateur rights for “Les Miz,” just released in the last year, brought out a lot of talent to audition for the show.
“It’s one of those shows that everyone wants to do,” Rauch said, “so we got a lot of people come audition that were a lot of new faces, and some of the older ones who were involved in our theater for a while came out, too. (There is) a lot of talent. Our leads are really strong.”
Rollet said they have a strong chorus as well, and one of the biggest problems they have is trying to get them all on stage together.
“It’s a big, full chorus that sounds great together,” Rollet said.
Ticket sales started over a month ago online, and the ticket line is already logging orders, which Rauch said is unusual a month before one of their shows opens. Their auditorium has 440 seats.
“There is a ton of talent in the show,” Rollet said. “It’s not an easy show to sing… when people hear it they’re going to be wowed by how it sounds.”
Producer Brow said scheduling rehearsals and getting props and costumes for a cast of 50 has been a major challenge.
“This cast has become a really good, tight-knit group,” Brow said. “Everyone’s really meshed well together, which has been nice.”
She added that their production follows the touring productions as closely as they can.
“It is the first time that the adults Downriver are putting the show on,” she said. “It’s not the high school version. It’s the full-fledged version, and it’s exciting to be the first group Downriver to be able to do this.”
Megan Robertson of Carleton, who plays Cosette, said the role is a dream come true for her.
“I grew up listening to the music for a long time with my mother,” Robertson said. “The fact that I actually get to perform with my mother, Judith Ann Mulheisen, (of Riverview), who is playing Madame Thenardier, makes it even more special for me.”
Tamara Marla, of Wyandotte, who plays Eponine, was helping some students prepare for the auditions when she decided to audition herself. She said she has always been a big fan of the musical.
“I can remember being 5 years old and listening to the songs,” Marla said, “And every time I got to perform I always wanted to sing ‘Castle on a Cloud’ when I was a little girl. It was probably my go-to song for a very long time.”
Brendun Deer of Melvindale, who plays Marius, said performing this role in “Les Miz” was on his bucket list.
“It’s a show that everybody knows that’s in the theater world and they come to love,” Deer said. “And now that the movie’s come out, even people that didn’t know about the show knows it now and loves it.”
Rob Douglas of Brownstown Township, who plays Javert, said this is the third villain he has played, having been Bill Sikes in “Oliver!” and Daniel “Rooster” Hannigan in “Annie.”     He said his character has blinders on, and has a hard time knowing what is real and what is not.
“At the end when he finally realizes that maybe he’s not the hero that he thinks he is,” Douglas said, “maybe he has had it all wrong, the whole time, so that’s interesting.”
Larry Hubbard of Taylor, who plays Jean Valjean, said he worked hard to earn the role, and he is excited that his son Gabe, 12, is playing Gavroche, and his wife, Patty, is in the ensemble.
“I just enjoy being with my family in these shows, and all the people here are just wonderful,” Hubbard said. “They are like a family as well.”
Other leads and supporting cast include David Buhr of Lincoln Park as Enjolras, Rachel Huckling, 11, of Lincoln Park as Young Eponine, Jeff Powers of Huron Township as Thenardier,  Lori Hawkins of Riverview as Fantine and Sydney Robinson, 10, of Southgate as Young Cosette.
Ensemble members include Allen Park residents Ashley Blevins; Alan Demorow; Audrey Demorow, 8; and Kellie Runkle, and Brownstown Township residents Melanie Berger; Ren Clark; Lucie Douglas, 8; Maddie Douglas, 11; and Erin Krista Schmidt.
Also in the ensemble are Nathaniel Hermen, 10, and Rebecca Hermen of Dearborn, Richard Wieckowski of Flat Rock and Debbe Lavely of Grosse Ile Township.
Lincoln Park residents in the ensemble include Liza Boos; Ryan Boos, 11; Emily Hunt; Adriana James; Julia Klug, 9; Kelly Klug; Catherine Long; and Merritt Solomon.
Melvindale ensemble members include Domingo Guzman and David Nylz III.
Also in the ensemble are Mark McMahan and Jessica Pusino of Riverview and Sara Maria Dally; Rian McDonald; Isabel Perez, 9; and Anne’ Renforth of Southgate.
Patty Hubbard and Michael Parks of Taylor are in the ensemble, as are Trenton residents Cheryl Eagal, John Meiers and Nick Mullins. Woodhaven residents Christopher Gawel, Bradley Hardecki, Stephen Phillips and Sydney Villanueva also are in the ensemble.

“Dead Man’s Cell Phone,” a dark comedy by Sarah Ruhl, opens the 2013-14 season at Wayne State University’s Studio Theatre, running through Oct. 26 in the lower level of the Hilberry Theatre, 4743 Cass Ave. in Detroit.
For tickets, call 313-577-2972 or go to www.wsushows.com.
Jean, a woman in a café, annoyed by Gordon Gottlieb’s unanswered cell phone, walks over to discover he is dead. After calling 911, she decides to keep him alive by answering his phone.
While she discovers he was not a very good person, her fabrications for his family provide them with some closure.
Alexis Barrera of Hartland plays Jean, with Brad Smith of Waterford as Gordon Gottlieb, the dead man.
Hannah Butcher of Taylor plays the Other Woman with Logan Hart of Grosse Pointe Woods as Dwight Gottlieb, Gordon’s brother; Kelly Robinson of Taylor as Mrs. Gottlieb, his mother; and Sydney Machesky of Shelby Township as his widow.
Wyatt Clement of South Lyon and Maria Ochoa of Clawson are in the ensemble.

“Big Love” by Charles Mee, and a modern version of Greek playwright Aeschylus’ “Supplicant Women” continues the Hilberry season at WSU.
A classic battle of the sexes, the show, which runs Oct. 25 to Dec. 7, follows three brides as they quarrel with their three arranged marriage suitors.
Tickets range from $12 to $30, and are available by calling 313-577-2972 or online at wsushows.com. The Hilberry is at 4743 Cass Ave. in Detroit.
“Big Love” follows brides forced in arranged marriages who flee their country, pursued by their prospective grooms. Comedic mayhem, passion and some violence follow, as the dark comedy explores human rights abuses, gender politics, violence and love.
Directed by Blair Anderson, the cast includes Megan Barbour as Olympia, Danielle Cochrane as Thyona, Brandon Grantz as Oed, Brent Griffith as Nikos, Annie Keris as Bella/Eleanor, Sarah Hawkins Moan as Lydia, Topher Payne as Giuliano, Brandy Joe Plambeck as Piero/Leo, and David Sterritt as Constantine.