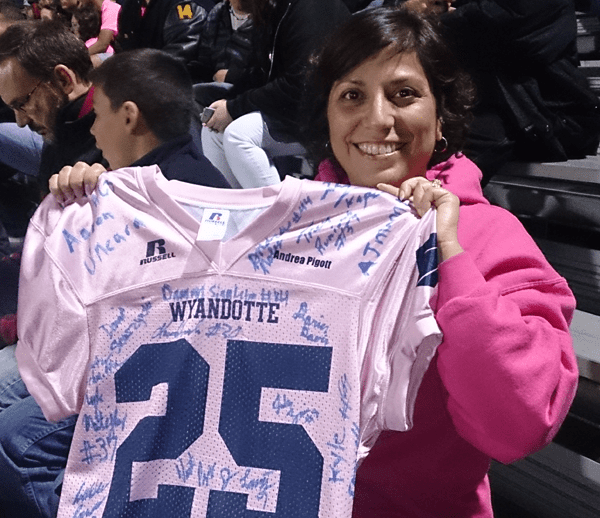 Photo by Gabriel Goodwin
Andrea Pigott proudly holds up her pink Wyandotte Bears jersey during the 41-30 win over Taylor Truman. She attended the game to support D’Aries Davis, who wore the jersey last year. Pigott is a five-year breast cancer survivor and said she was honored when Davis asked to honor her by playing in the game with her name on his jersey. The jersey was auctioned after the game and she decided to bid on the jersey to keep as part of the memory.

By GABRIEL GOODWIN
Sunday Times Newspapers
WYANDOTTE — While breast cancer survivors are being celebrated throughout the city during the month of October, one survivor from Brownstown participated to support newly-diagnosed women.

Andrea Pigott, a five-year survivor of breast cancer, said anytime she has the chance to give someone the love and support they need to fight, “it just becomes an overwhelmingly good experience.”

“Battling cancer is just a all-around scary experience because your world is literally turned upside down,” she said. “Everything is new and unknown, so any way to provide someone with the comfort of knowing what treatments to expect and the possible side effects is always a good start.”

Pigott was diagnosed in November 2008, but her journey began months before that when she found a lump in her breast. She noticed the lump during a self breast exam, and said she didn’t initially think anything of it.

“The doctor knew right away it was something serious and ordered an ultrasound, then called and told me to see a surgeon immediately,” she said. “All this happened in one day. It was a Wednesday, actually, and I had my surgery scheduled for the upcoming Monday.”

Pigott said the moment she woke up from that surgery, they told her it was breast cancer. The oncologist told her it was triple-negative breast cancer — which means the three most common types of receptors for cancer were not present in the tumor, and it was not receptive to the common cancer treatments — so they had to be very aggressive in their attempt to treat it.

“Having that diagnosis is not good,” she said. “I mean, no breast cancer is good, but what triple negative means is that there is no targeted therapy and there is nothing you can take to keep it away. They have to throw everything at you, regardless of what stage you are classified in.”

She ultimately went through 16 rounds of chemotherapy, then radiation treatments, and another surgery to remove her lymph nodes and additional breast tissue to ensure it didn’t spread beyond the breast. She said she was “lucky” it didn’t reach her lymph nodes because the cancer could have spread rapidly.

“Truthfully, I felt like they did the surgery, they got it out, and that was all there was to it,” she said. “I will be all right, but I started talking to the oncologist and doing my own research and it began to get scary. With triple-negative, the outlook isn’t really all that good. It has a very high risk of metastasizing to the other parts of the body.”

When she heard the words “you have cancer,” she said that date became an unforgettable moment in her life. She said the fear was overwhelming and began to look for a reason to fight.

That was when she said her children, siblings, and husband became the motivating factor to keep fighting, be positive, and stay strong.

“Something came over me where I just wanted to fight,” she said. “My family and my faith in God pulled me through. I knew I was protected and everything would be OK. My children were all I focused on and I didn’t want them to see me give up. I was lucky they were young enough not to know how serious the situation was for me and we kept it that way.”

Pigott said being there for all of their milestones — like graduating middle school and high school, junior and senior prom, and getting their driver’s license — became the goals she worked toward. She tried to find “a sense of normalcy” amid the chaos and focus her attention away from the negative.

For the first three months, she continued to work despite the treatments because she did not want the disease to stop her from getting things done. She said when she was finally forced to quit, she felt terrible.

“I didn’t want it to affect my life as much as it did,” she said. “It was not a good experience for me. I didn’t want people to feel sorry for me.

“I got very annoyed when I couldn’t do normal activities and had to ask for help because I wasn’t used to that. I never wanted to become the center of attention, but there I was.”

At one point, she said overheard a relative say “I wish I had cancer, like Andrea, because she gets all the attention,” which she said cut very deep emotionally because most people will never understand the pain and the changes cancer survivors experience during that period of time.

“Even five years later, the ‘what-ifs’ begin to creep back into your mind and it still gets to you,” she said. “I had to look back and say, ‘I’m glad I had a bad day’ (rather) than no day at all. I can definitely say I never want it back and I would never wish the experience on anyone else.”

She doesn’t regret her experience and said she learned a lot from it. She started to appreciate the smaller experiences and enjoy each day for what it was.

“There was good that came out of this,” she said. “I learned to be grateful for the little things each new day brings.

“I also began to really understand the depth of love people have for me. But to know I can help other women, who are struggling and hopeless, by sharing my story is a blessing. I just hope I can give them the faith and hope to survive.”