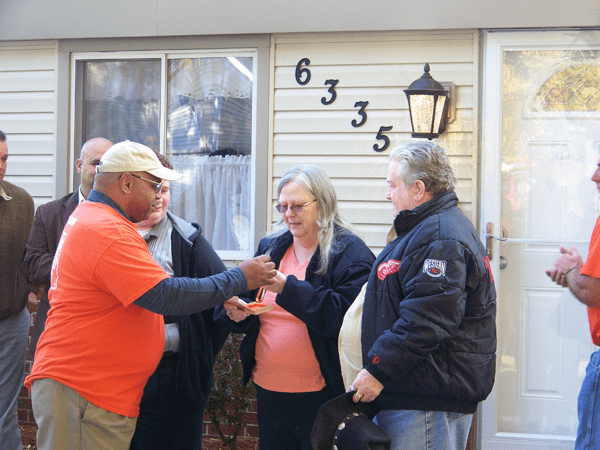 Photo by James Mitchell
Home Depot manager Rodney Harris (left) hands over the keys to new homeowners Alberta and Blaine Hicks Blaine Hicks, a Vietnam veteran and retired postal worker, and his family will settle in to their new house courtesy of Home Depot, Veterans of Foreign Wars Post 442 and city of Taylor.

By JAMES MITCHELL
Sunday Times Newspapers
TAYLOR — Dreams came true for a decorated war veteran and his family courtesy of Veterans of Foreign Wars, Home Depot and the city.

Blaine and Alberta Hicks Wednesday morning accepted keys to their new house on Oldham, bringing an end to a restoration project designed to provide deserving veterans with a place to call home.

“This is what it’s all about,” said Rodney Harris, project manager for Home Depot Store 2789, which through the Home Depot Foundation provided the materials and supplies for the project. “This is life changing. When you have a chance to help someone, please do so.”

The Home Depot Foundation and VFW Post 442 worked with the city to refurbish two houses owned by Taylor Care’s, projects made possible through skilled volunteers.

Mayor Jeffrey Lamarand said the multi-faceted efforts and introduction of the Blaine family to Taylor spoke to the heart of what the city can be.

“This is about community,” Lamarand said. “A welcome to home ownership for the Blaines, and welcoming them to the Oldham and Taylor communities.”

The project accepted applications from eligible veterans. Raised in Taylor, Blaine Hicks followed his 1968 graduation from Kennedy High School with a four-year hitch in the U.S. Navy, and served in Vietnam as a radioman, earning several medals for his service during the war.

“Veterans went to war for us,” Harris said at the ceremony. “We owe them.”

Hicks retired from the U.S. Postal Service in 1997 after a heart attack. He and his wife have been married since 1972 and have six children, four daughters and two adopted special needs children. Going above and beyond, the Hickses served as foster parents for 29 children, and are currently raising a 14-year-old grandson.

The recent economic downturn left the family struggling as many had to rent a home for their extended family, which they now have on a quiet street in the city’s north end.

The Hickses were overcome with gratitude, relief and tears as they toured their new home Wednesday. Alberta Hicks said the family had struggled to host a proper holiday, and they look forward to a true Thanksgiving gathering.