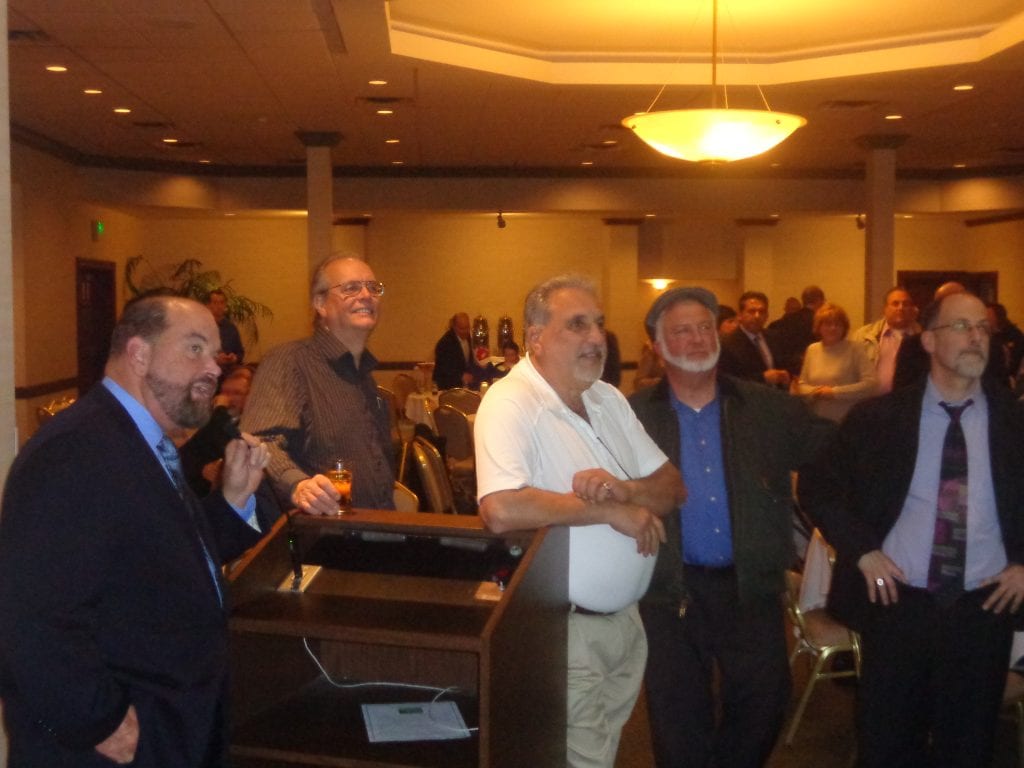 Photo by Bob Oliver
Mayor John O’Reilly Jr. (left) announces the final results from yesterday’s general election as the last precinct is uploaded to the city’s website. O’Reilly, who was re-elected, was joined by many supporters and city employees to watch the results at Park Place Catering after the polls closed at 8 p.m.

By BOB OLIVER
Times-Herald Newspapers
DEARBORN – It came down to the last precinct, but there will be two new members on the city council and a new council president when the terms begin in January.
With 55 of the city’s 56 precincts in, Council President Thomas Tafelski and first time council candidate Susan Dabaja were dead even in votes. The council candidate receiving the most votes becomes the president of the council during the term.
After the votes from the last district were counted it was determined that Dabaja received 9,398 votes to Tafelski’s 9,366 and will take over as council president in January.
Dabaja said she was surprised to receive the highest number of votes among the council candidates.
“When I decided to run, my goal was just to be on the council, not to obtain the presidency seat,” Dabaja said, “but I’m very grateful for the results of the election.”
Dabaja said there is a lot of responsibility that comes with being a member of the city council and that she is ready for the challenge.
“The residents of Dearborn have put a lot of trust in me,” Dabaja said. “I plan on doing my best to help move the city forward. I see this as an opportunity for me to give back to the community and be a voice on the council for my fellow residents.”
She added that she is excited to work with the mayor and his administration as well as her fellow council members in the future.
“During the last year I have gotten to meet and speak with all of the other city council members and I am really looking forward to working with them,” Dabaja said. “They have all been very kind and respectful throughout the election season and I believe we will work well together.”
Dabaja is only the city’s second female council president, the first being Marge Powell, who served from 1978 to 1986.
The other four incumbents in the race, Brian O’Donnell (7,929), David Bazzy (7,809), Robert Abraham (7,477) and Mark Shooshanian (7,407) all received enough votes to retain their seats.
They will be joined by council newcomer Mike Sareini, who received the third highest number of votes with 8,723. Sareini’s mother, Suzanne Sareini, is one of two council members retiring when her term ends at the end of December.
The other retiring member is Nancy Hubbard.
The council candidates who did not receive enough votes for one of the seven seats were Patrick Melton (7,021), Tarek Baydoun (6,280), Sharon Dulmage (5,601), Kristyn Taylor (5,315), Jane Ahern (5,225), Colette Richards (4,231) and Stephen Dobkowski Jr. (3,551).
Abraham, who will be serving his fourth term on the council, said it is a relief that the election is over, but that there is a lot of work to be done by the council moving forward.
“We have a new council, with new opportunities to do bigger and better things for Dearborn,” Abraham said. “We have to keep working to provide excellent services to our residents.”
O’Donnell, who will serve his second term on the city council, said it was “very gratifying and humbling” to know that his work as a councilman was recognized and rewarded with another term by Dearborn voters.
“I’ve worked hard the last four years and I’ve tried very hard to be very open and be creative with solving problems,” O’Donnell said.
O’Donnell also said it is important the new council is able to work together to solve the city’s problems.
“We have a lot of very important decisions to make,” O’Donnell said. “But everyone wants to do what’s best for the city and I think we have a good team in place to do that.”
In the mayoral race, incumbent John O’Reilly Jr. defeated challenger Ed Binkley 13,883 to 3,102. O’Reilly has been mayor since 2006 and will serve his second full term as mayor.
After the final numbers were announced, O’Reilly said that he was “as happy as he could be” with the results of the election.
“I think we have a very bright future and that there are great things to come for Dearborn,” O’Reilly said.
He said it was special to him that the city elected the first female council president in nearly 30 years under him because the previous one served under his father, John O’Reilly Sr., when he was mayor of Dearborn.
“It’s very exciting to have a new council president,” O’Reilly said.
In the race for city clerk, incumbent Kathleen Buda received more than 75 percent of the total votes with 12,347 and defeated student services liaison Khalil Dakhlallah (4,026).
Buda will serve as clerk for her fifth term beginning in January.
In total, 18,520 ballots were cast in the general election, which is just over 30 percent of the 61,295 registered voters in the city.
(Bob Oliver can be reached at [email protected])