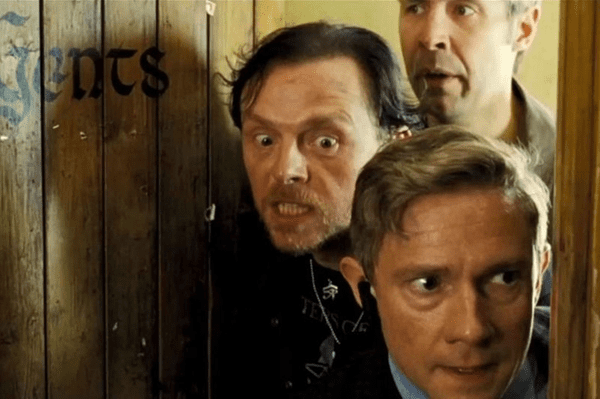 Scene from “The World’s End”

PICKS OF THE WEEK
“Planes” (PG) — This animated spin-off of Pixar’s “Cars” follows Dusty Crophopper (voiced by Dane Cook), a talking airplane who’s afraid of heights. Despite his fears, Dusty is determined to win an around-the-world airplane race — pitting him against the fastest and most advanced planes in the world. True to the formula played out by “Cars 2” and “Turbo,” our hero will meet many other talking planes with silly personalities that border on racial stereotypes.

It’s no surprise that this originally was planned as a straight-to-video venture. The best jokes will go right over the kids’ heads — and aren’t entertaining enough for most grownups. The kids probably will have more fun playing with the toys than watching the movie.

“We’re the Millers” (R) — David (Jason Sudeikis) is a mid-30s slacker — a no-ambition, small-time pot dealer who sells to all types except children. When he gets mugged of his money and merchandise, David has to pay off his debt by bringing the next shipment up from Mexico. He recruits a pretend family to help him get through the border without suspicion — the stripper-next-door (Jennifer Aniston), a hopeless dork (Will Poulter) and an aggressive runaway teen (Emma Roberts) fill the roles of his fake suburban wife and kids.

For a raunchy, over-the-line comedy, the film is surprisingly quick-witted and enjoyable. A few scenes might make you squirm (a tarantula bites an unfortunate area), but all in all, the runtime is a funny, somewhat cynical take on the American Dream that seems so bizarre to so many.

“2 Guns” (R) — Denzel Washington and Mark Wahlberg play two bank-robbing buddies hiding a secret from each other — they’re both crooked law-enforcement agents trying to entrap each other. Washington is a DEA agent, and Wahlberg is a naval intelligence officer. There’s more to the plot than that; however, this is the type of movie where plot development is something that happens between explosive gun fights and bouts of banter. If you like your buddy action flicks a little bit tougher, a little bit louder with a lot more shooting, then you can enjoy this rental.

“The World’s End” (R) — A handful of thirtysomethings, lead by their delusional friend (Simon Pegg), try to finish a drinking challenge they took up as reckless teens. Then a science-fiction/action movie intrudes on their reflective comedy as alien imposters come flailing at the flabby old friends. It’s the third movie in a line of barely related flicks starting with “Shaun of the Dead.” The jokes come at you fast — almost as rapidly as the movie’s gears shift from funny, to touching, to action packed. Just when you think you know where it’s all going, another surprise hits the screen like a projectile in an alien bar fight.