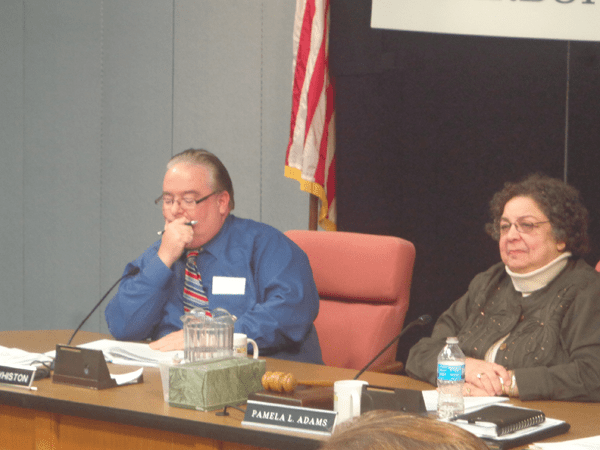 Photo by Bob Oliver
Dearborn Public Schools Supt. Brian Whiston (left) visibly reacts as he is told that he has been selected as the Michigan Association of School Administrators’ Superintendent of the Year. Whiston was surprised with the news during the DPS Board of Education meeting Nov. 11. His name automatically will be entered as a candidate for the American Association of School Administrator’s’ National Superintendent of the Year, which will be announced in February.

By BOB OLIVER
Times-Herald Newspapers
DEARBORN — Dearborn Public Schools Supt. Brian Whiston was surprised with good news during the Nov. 11 Board of Education meeting. He was informed that he had been selected as the 2014 Michigan Superintendent of the Year by the Michigan Association of School Administrators.

“It’s quite an honor, ” Whiston said. “It’s very humbling to be selected out of the 700 state superintendents as superintendent of the year.”

Whiston said he was surprised not only to win, but even to have been nominated for the award.

The announcement was made by MASA Executive Director William Mayes and Wayne Regional Educational Service Agency Supt. Chris Wigent, who made a surprise entrance into the meeting and caught Whiston between agenda items.

Wigent said Whiston was deserving of the award because he is always focused on doing what’s best for DPS students.

“Some people say they want to do the best for kids, but that’s only with the cameras rolling or when there’s a crowd around, but not Brian,” Wigent said. “He is always an advocate for his students.”

Wigent said both personally and professionally he was excited to see Whiston recognized by the state for his efforts.

In a press release announcing that the award selection, MASA said Whiston was chosen because of “his exemplary leadership” and for “continually placing student learning as the top priority” for the district.

Whiston was selected by a panel of judges comprised of representatives from different state education stakeholders, including superintendents from local and intermediate school districts, the Michigan Board of Education, the Michigan PTSA, local school boards, principals and school business officials.

Nominees were measured against each other in criteria such as leadership for learning, communication, professionalism and community involvement.

Whiston said the award is really a testament to the work of everyone in the district.

“I certainly share this with the Board of Education, our partnership with teachers, administrators and all our employees,” Whiston said. “We also have a great community and the help of the supportive parents of more than 19,400 students. Working as a team we are getting some very good results. This award recognizes everyone’s hard work.”

Board President Pam Adams said she found out about the award during the previous week and was thrilled at the news.

“This is very well deserved and the board appreciates everything that the superintendent does for the students and district,” Adams said.

Whiston was nominated for the award by a district-wide effort led by DPS Human Resources Director Glenn Maleyko, who filled out the nomination application and said he received the overwhelming support of many groups, including the board of education, the teachers union and administrators of the district when completing it.

Whiston will be recognized for the award at MASA’s Midwinter Conference in Kalmazoo in January. He also will have opportunities throughout the year to address fellow superintendents in the state about his work.

Wilson name will also be automatically entered as a nominee for the American Association of School Administrator’s National Superintendent of the Year, which will be announced in February.