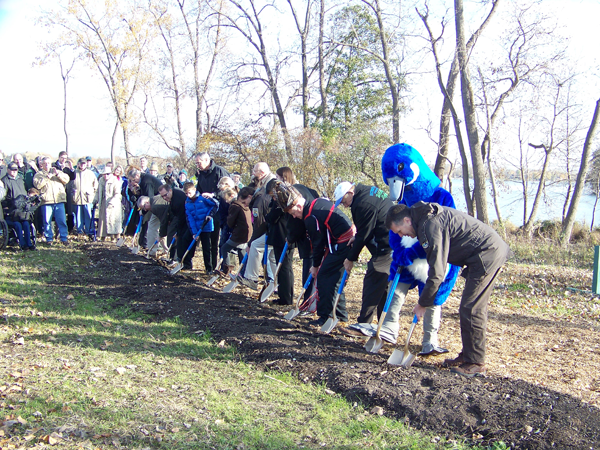 Photo by James Mitchell
Dignitaries including U.S. Rep. John Dingell, Wayne County Executive Bob Ficano, U.S. Fish & Wildlife Director Dan Ashe and others planted shovels at the future site of the Detroit River International Wildlife Refuge Center. The conservation effort has been nine years in the making while volunteers and partners restored the former site of an auto plant.

By JAMES MITCHELL
Sunday Times Newspapers
TRENTON — The ceremony had been long in the making, but time flows patiently along the Detroit River. On Nov. 8, elected officials, dignitaries, conservationists and dozens of friends gathered at Humbug Marsh to mark the long-awaited beginning of the Detroit River International Wildlife Refuge Visitor Center.

John Hartig, refuge manager, said the groundbreaking and refuge itself reflected years of effort from a variety of friends and partners.

“Through public and private partnerships we’re recreating gathering places for people and wildlife,” Hartig said. “It all comes together today.”

Wayne County, the U.S. Fish and Wildlife Service and other partners have worked for nearly a decade to restore more than 40 acres of land — including the last mile of natural Detroit River shoreline. The property had for decades housed a Chrysler plant, which deactivated in 1990.

Some saw the brownfield left behind as ruined land, but instead a group of environmentalists and conservationists began the lengthy process of clearing and restoring the property, creating what Hartig called a “unique destination of choice.”

Dan Ashe, national director of the U.S. Fish & Wildlife Service, said the effort was true to its international name, with partners from Canada involved in the mutual environmental concern.

“Our job doesn’t end at the borders of the United States,” Ashe said. “This is an important beginning.”

Attendees of the ground-breaking ceremony included U.S. Rep. John Dingell (D-Dearborn), who was credited with making the project a priority both in Michigan and Washington, D.C.

“Forty years ago there was nothing out here,” Dingell said at the site. “We all worked together to get where we are.”

The Detroit River International Wildlife Refuge was established in 2001 to develop a sustainable future for both the river and western Lake Erie through environmental cleanup and preservation. Overall the refuge contains nearly 6,000 acres of natural wildlife habitats, wetlands, marshes and islands along 48 miles of shoreline.

Humbug Marsh will host the planned Gateway and Visitor Center. Inside will be planned exhibits, theater, classrooms and wildlife observation areas.