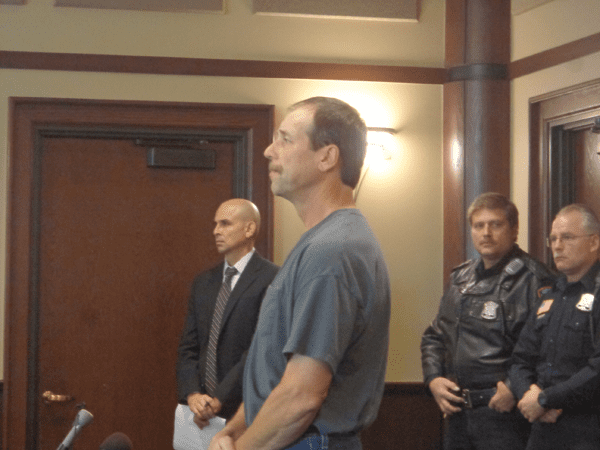 Photo by Bob Oliver
Theodore Paul Wafer (center), 54, of Dearborn Heights, listens as 20th District Court Judge Mark Plawecki arraigns him on the charges of second degree murder, manslaughter and felony firearm on Nov. 15. The charges stem from the shooting death of 19-year-old Renisha McBride on the front porch of Wafer’s house during the early morning hours of Nov. 2.

By BOB OLIVER
Times-Herald Newspapers
HEIGHTS – The Wayne County Prosecutor’s Office announced it is charging a 54-year-old Dearborn Heights man in the shooting death of a Detroit woman on his front porch Nov. 2.

Theodore Paul Wafer, 54, is being charged with second degree murder, manslaughter and felony firearm for the shooting and killing Renisha McBride, 19, with a shotgun at his house in the 1600 block of Outer Drive about 4 a.m.

Wafer was arraigned before 20th District Court Judge Mark Plawecki on Friday, just hours after Wayne County Prosecutor Kym Worthy announced the charges during a press conference outside her office in the Frank Murphy Hall of Justice in Detroit.

Wafer appeared in court under his own recognizance and was given a $250,000, 10 percent bond.

He will have a preliminary examination of the evidence against him before Plawecki on Dec. 18 at 9 a.m.

“We have issued these charges because we believe the evidence will show that self defense was not warranted,” Worthy said. “We have examined everything in this case and we have determined that these are the appropriate charges.”

Worthy also acknowledged public interest in the case but said it was not a factor in her office’s decision to prosecute.

“Undoubtedly, there has been enormous interest in this case, but we do not make decisions in our cases based upon public opinion,” Worthy said. “We go where the facts and evidence lead us.”

McBride’s family believe she approached the house after being involved in an early morning traffic accident that occurred in the area and that she had gone to the house seeking help because her cell phone battery was dead.

The Detroit Police Department announced last week that they believe McBride was involved in a single-car collision near Brammell and Warren in Detroit about 1 a.m., about three hours before she was shot and killed.

Detroit police received a call about a no-injury accident involving a woman who had been speeding before striking a parked car. McBride then got out of her vehicle and left the scene.

The collision took place about six blocks away from the house on Outer Drive.

A 911 call in Dearborn Heights at 4:42 a.m. informed officers of the fatal shooting. Officers and emergency crews responded to the house and discovered McBride’s lifeless body in the area of the front porch of the house.

What occurred during the time between the crash and the shooting has not been released by the Dearborn Heights police or the Prosecutor’s Office.

An autopsy report released by the Wayne County Medical Examiner’s Office concluded that McBride was killed by a shotgun wound to the face that was not delivered at a close range.

A toxicology report, also completed by the Medical Examiner’s Office, concluded that McBride had .218 percent alcohol in her system which is nearly three times the legal limit of .08 for driving in Michigan.

It also concluded that there were traces of marijuana in her system.