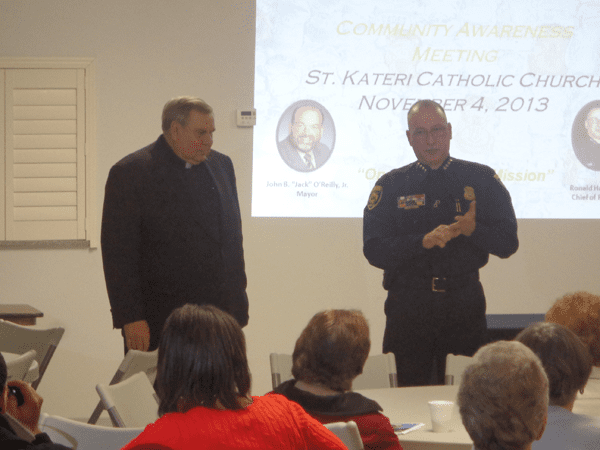 Sgt. Donald Armstrong gave the audience an overview of the officers in the field at any given time, reported on the most recent crime statistics for the department and discussed how officers patrol the city.

Armstrong said that at any given time there are several police officers working in the city. Besides patrol officers, he said there are evidence technicians, K-9 officers and border task forces for east and west Dearborn. Each task force is comprised of four officers and a supervisor.

He said the effectiveness of officer usage and other strategies have helped the department reduce Part A crimes in the city from 5,637 in 2012 to 5,245 in 2013, a drop of nearly 7 percent. The statistics are from Jan. 1 to Oct. 31 in each year.

“Part A crimes are the most serious that we have in the city,” Armstrong said. “They include such things as vehicle thefts, robbery, assaults, breaking and entering into homes, larcenies from vehicles and malicious destruction of property.”

Armstrong said the city is broken into eight patrol areas, or “beats,” by the police, with a number assigned to each though the number of the area is not a marker of one patrol area being any more important than any other.

According to police statistics, crime has been reduced in six of the eight patrol areas, especially in beat 2, which contains the Fairlane North Shopping Center. In that beat, the number of Part A crimes dropped from 1,430 in 2012 to 1,170 in 2013, just over 18 percent.

Police Chief Ronald Haddad attributed the drop in the crime rate in that beat to extra attention provided by police.

“You literally have hundreds of thousands of people coming into that area every year because of the stores and because it’s so close to the Southfield Freeway,” Haddad said. “They used to have a small shoplifting problem, so we began to pay close attention to the area and learned to better recognize signs of potential violators.”

Haddad added that another reason for the crime rate drop was that the city abandoned their old policy of citing and releasing shoplifters and implemented a new strategy that places a $400 bond of offenders.

Sgt. Dan Bartok told the audience that many crimes that the department investigates are crimes of opportunity where the victim unknowingly makes themselves a target by not locking house windows or vehicle doors.

“Most criminals seek the easiest targets they can find,” Bartok said. “They want to get in quickly, quietly and unseen, so little things like leaving lights on in the house or making sure that all windows are locked can make a huge difference.”

For home security, Bartok also recommended that all residents keep their garage doors closed and locked, install and use exterior lighting and to make sure not to leave items laying in the yard that may be used to gain entry into the house.

“Some houses have second floor balconies with sliding doors that are rarely locked because the homeowner doesn’t think that anybody will climb up there, but then they leave an extension ladder next to the house,” Bartok said. “It seems simple, but everybody makes mistakes and can forget things like this. That’s why we like to constantly remind residents of these simple steps that can help them.”

He also said that residents leaving on vacation can notify the department and request a “Vacation House Check” in which officers patrolling will make random stops by the house while the owner is away and make sure that the property is secure.

Bartok also said many crimes to vehicles, such as thefts and larcenies, could be prevented if residents follow similar steps offered for home security.

He concluded by saying that residents need to be aware of their surroundings and be cognizant of not leaving themselves open to theft by not following simple safety precautions.

Armstrong also informed the attendees that the police recommended they call the department’s suspicious activity line anytime that they observe anything that seems abnormal.

“We’re here to take your calls,” Armstrong said. “You are not bothering us by reporting something. We need the help of the community to make the neighborhoods as safe as possible.”