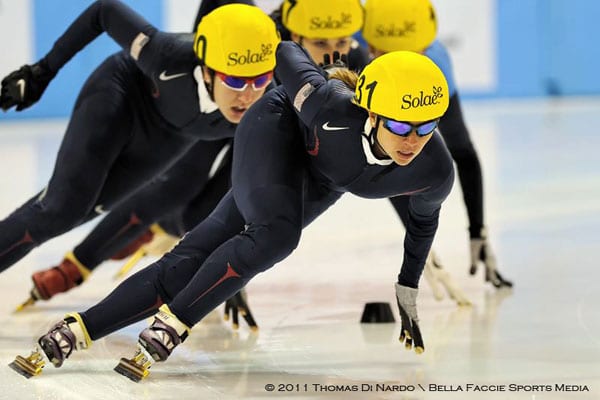 By GABRIEL GOODWIN
Sunday Times Newspapers
MELVINDALE — Four years made the difference for a Melvindale speed skater and her family.

Jessica Smith became a U.S. Olympian Jan. 5. after dominating her events during the time trials in Salt Lake CIty, Utah. She qualified for the 500-meter, 1,000-meter, and 1,500-meter short track speed skating events in the 2014 Olympics in Sochi, Russia, which begin Friday.

Her family — her parents, Rick and Reina Smith, and brother, Travis Smith — are going to attend the games to support Jessica, but the trip is expensive. The cost of the trip for the three will be about $30,000 in travel and lodging expenses alone, her father said, then there are the “everyday expenses, like eating, that will probably cost $6,000.”

But, her parents said the whole experience is “a lot more important than the money.”

“The Olympics was always Jessica’s goal,” Reina Smith said. “She dreamed of going to the Olympics and finally got the chance in January. So, the experience really has been a dream come true for her. Well, a dream come for all of us, really.”

“Even though roller skating and in-line skating weren’t a school sport, she stuck with it because she enjoyed it.” Reina Smith said. “There was a hope the sport would be adopted by the Olympic Committee. Eventually she progressed through the sport and won everything she could. She finally decided to pursue her Olympic dreams on ice skates in 2007.”

Although this year is her first time in the Olympics, Jessica Smith qualified as an alternate in 2010. Her parents said they were proud of her then and are now, but “her skill level and luck is a lot better now compared to last time.”

Rick Smith said she had troubles with her skates during the 2010 Olympic qualifiers.

“In 2010, she was switching between (roller) skates and ice skates, then caught a few bad breaks with broken skates,” Rick Smith said. “That experience just made her more determined this time around. With some good luck mixed with her skillset now really gives her a real shot to do very well.”

Once she qualified for the Olympics, one of her neighbors started raising money for the family through www.youcaring.com/other/olympic-dreams-come-true-/122826 without their knowledge, Reina Smith said, because they know going to Sochi to support their daughter was such a large expense for the family.

Rick Smith works as a truck driver and Reina Smith is a part-time barber.

The giving did not stop there either, Rick and Reina Smith said, because the community “really stepped up” to help them out.

Play Atlantis in Melvindale donated 20 percent of all proceeds made by the arcade Jan. 24 to help with the family’s expenses. A spaghetti dinner was held at the Melvindale Civic Arena Jan. 25 and the money went to support the Smith family. The American Legion Post 472 Ladies Auxiliary hosted a spaghetti dinner Jan. 26, donating all the proceeds to the trip fund.

“The city has really pulled together to help us,” Reina Smith said. “We appreciate all the support from the community. Melvindale is called ‘The Little City with a Big Heart,’ and we are really being made into an example of that.”

It is still unsure whether the entire trip will be paid for through donations, Rick Smith said, but “that still isn’t the important thing.” He said their daughter finally getting the opportunity to achieve her dream is all he could ask for. He said he and his wife are just two “proud parents who want to see their daughter achieve her goals.”

“I have always seen families, in the stands at the Olympics, screaming from joy after a win and hopefully we can experience that in the next few weeks. She definitely has a great shot at medaling and we hope it can be gold, but we are proud of her no matter what happens. This has just been a wonderful experience.”