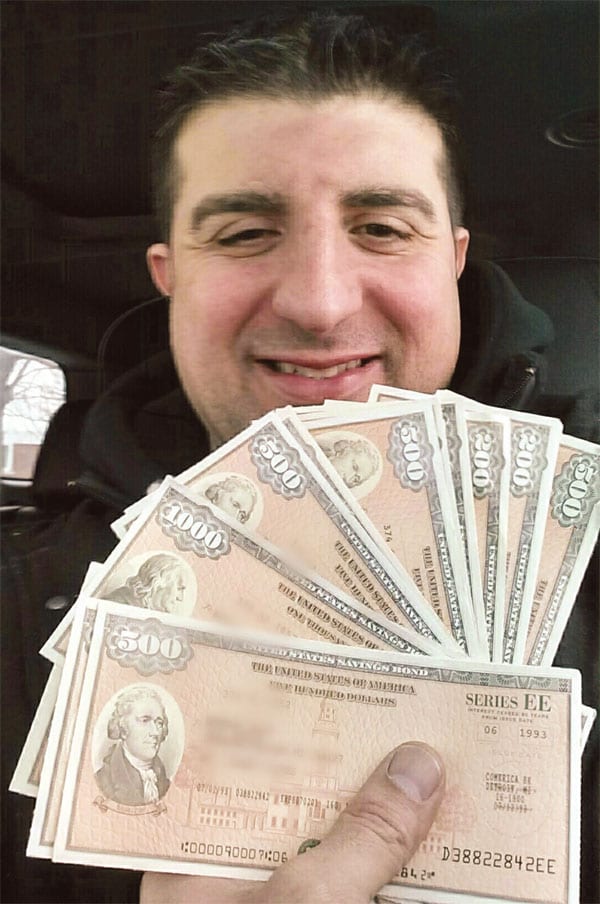 Photo courtesy of Norman Saleh
Norman Saleh poses with multiple U.S. savings bonds he found while cleaning a house in Dearborn Heights earlier this month. Saleh, who owns the residential trash removal company XS-Trash, found nearly $100,000 in bonds in a tin box in a bedroom. He immediately returned them to the owner of the house.

By BOB OLIVER
Times-Herald Newspapers
HEIGHTS — Norman Saleh believes that doing things the right way is the only way to do business.

Saleh, who owns the residential trash moving company XS-Trash, was hired to clean out a house here when he made an interesting discovery: between $90,000 and $100,000 in U.S. savings bonds mixed in with other trash.

“There was garbage floor to ceiling in the house so me and my crew were working through one of the rooms trying to clear it out when we found a tin box on the floor,” Saleh said. “I had it in my hand and was going to throw it in a trash bag when I decided to open it. It was filled with the bonds.”

He said that after making the discovery he contacted the owner of the house, who was understandably shocked at the discovery.

“He didn’t believe me at first,” Saleh said. “He just said, ‘You’re kidding me.’ But I told him I wouldn’t call to kid someone on something like this.”

Saleh said the homeowner rushed back to the house and was grateful for the find, telling Saleh that “no good deed goes unnoticed and that it would come back to him tenfold.”

Saleh also said that original media reports that he was given $15,000 for the return of the bonds were not true.

“The money that was said to have been a tip was really the money we originally agreed upon for me removing the garbage from the house,” Saleh said. “But he did allow me to buy the house from him for $30,000, though it is valued at $100,000.”

He added that the price for the house is fair because it needs major repairs and the homeowner was not in a position to fix them.

Saleh said that it wasn’t a difficult decision to return the bonds.

“My business is built on trust,” Saleh said. “My customers invite me onto their property and into their homes and I go there to help them. I won’t take advantage of that trust and take things that are not mine, even if the customer believes everything in the house is trash.”

He also said that the response he has gotten has been overwhelmingly positive.

“My website has gotten thousands of hits while before it was only getting maybe 50 to 100 a day and I’ve received many phone calls from people thanking me for my honesty,” Saleh said. “It feels good to help people and I feel that running an honest business sends a good example to the community.”

He also said he’s been contacted by representatives of various media outlets about the bonds, including from “The Ellen DeGeneres Show.”

“When they contacted me I thought I might have been invited to appear on the show, but we spoke and they wrote a blog about it instead,” Saleh said. “I’m kind of relieved because if I’d have been on I’d have gone blank.”