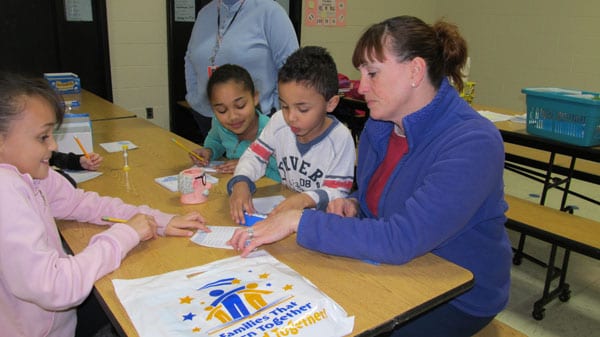 ‘We need a lot of scientists and mathematicians. The more you start them out early, the better off they can be in those careers.’
— Gary Lalli, Taylor teacher

By SUE SUCHYTA
Sunday Times Newspapers
TAYLOR – While students played board games with their parents during Math Mania night Feb. 4 at McDowell Elementary, they were surreptitiously part of a calculated plan to improve their math skills.

“It is learning in a fun way,” third grade teacher Michelle VanDerworp said. “There is no stress, (and) there is no test at the end of the session. It is just to have a good time with their parents.”

Van Derworp said the teachers encourage parents to play learning games with their children at home as well. She said about one-third of the school’s 400 students attended the math game night.

Nannette Kuhn, the district’s Title I parent involvement facilitator, said research has shown that when parents are more involved in their children’s education their children are more successful learners.

Title I is a federally funded program for children who struggle to learn, and provides funding for programs and services to enrich classroom learning with specialized instruction to help students meet academic standards and take an active interest in what they learn and can achieve.

“We want to be able to get the parents to be involved as much as possible in as non-threatening a way as possible and make it fun,” Kuhn said. “Parents, a lot of times when you say ‘involvement,’ they are thinking they are going to have to volunteer for something or do something they don’t know how to do or they will feel uncomfortable. We want to have people come in so that they know it’s as simple as playing games with your kids, reinforcing skills that they are learning at school.”

She said the family fun nights show parents that items they may have at home — like a deck of cards or other materials — create a fun, play-based activity, whether for 15 minutes a day or even once a month.

She said they have popcorn, chips, pretzels and other munchies and set games like Yahtzee that parents may have grown up playing, in different classrooms to turn the school event into a family game night.

“We are saying, ‘Look, you are adding in this, you are subtracting in this, you are making predictions. It is fun,’” Kuhn said. “Your family is doing it all together regardless of how (family members’) ages fall. That’s why they go in groups with their families, just to get them together.”

In addition to a math-themed game night, they hold two other events, a literacy and reading night and a writing arts night, at each elementary and middle school in the district to give parents an opportunity to get involved with what their children are learning.

Krystal High, whose daughter Avery Burns, 9, is a third-grader, is pleased that activity nights like Math Mania encourage parental involvement with their children and their teachers.

She said she and her daughter like to spend time together and she encourages other parents to try to spend more with their children.

“These are memories for our children,” High said. “If they see you interact with them to learn, it will be more fun for them, and they will probably do better in school.”

“Instead of just saying, ‘What’s one plus one?’ (it is) something fun and interactive for the kids,” Bostic said.

She said her son likes to count Cheerios before eating them. She plans to buy some of the board games they enjoyed playing at Math Mania.

Bostic encourages other parents to attend the family game nights to discover new ways to make it fun for their children to learn.

Sheila Lee, a state and federal employee who worked at the McDowell event, works with at-risk kindergarten students at Taylor Parks Elementary School. She said events like Math Mania provide learning enrichment with fun family interaction, and shows parents how to make math fun for their children.

She said she wishes she had been able to attend events like this with her children when they were younger.

Lee said playing games that require math skills not only reinforces recently learned skills, but students will be less inclined to dread math practice worksheets if they have been honing their addition and subtraction skills playing games.

A tangram is a Chinese puzzle in the shape of a square consisting of five triangles, a smaller square and a rhomboid (a parallelogram with unequal sides), which can be reassembled into many different shapes.

Lalli said it is important for young children to become familiar with spatial relationships in puzzle form, which introduces them to geometry at an early age, so when they study geometry in middle and high school they are not as intimidated by it.

“The more they learn here, at this level, will only better (prepare) them in the coming years,” Lalli said. “We look at space and spatial relations and we really don’t think of it as math. But when we hear that word ‘geometry’ it brings fear to a lot of people. But it is just basically the study of shapes and how shapes come together.”

Lalli urges parents to encourage their children to read and hone their math skills.

“Math is very, very important in their whole lives,” Lalli said. “The world’s almost based on math and if they can start at a very young age to understand that it will make it a lot better for them.

“We need a lot of scientists and mathematicians,” Lalli said. “The more you start them out early, the better off they can be in those careers.”