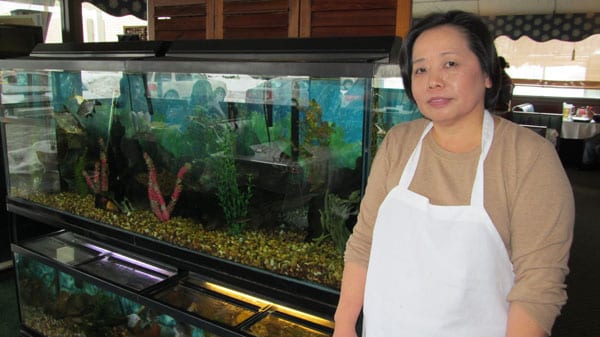 Photo by Sue Suchyta
Philanthropist Genevieve Vang, owner of Bangkok 96, 2450 Telegraph in Dearborn, said giving back to the community is a duty of all successful businesses. As a Laotian refugee during the Vietnam War era as a child, she said her memories of leaving behind a beloved pet and being hungry in a refugee camp spur her work with animal welfare agencies and area soup kitchens and food banks.

By SUE SUCHYTA
Times-Herald Newspapers
DEARBORN – Because she experienced hunger and sadness as a child fleeing Laos during the Vietnam War era, Genevieve Vang makes homeless and hungry people and pets a priority in her charitable giving.

Now a successful restaurateur at Bangkok 96, 2450 S. Telegraph, businesswoman and philanthropist Vang remembers looking out the airplane window as her family fled Laos, wondering what would happen to the puppy she left behind.

Later, in a refugee camp in Thailand, she remembers the dull ache of hunger when she and her family had barely any food to eat.

Her journey from Laos to Thailand, then to France and the United States instilled Vang with the belief that her struggles made her a better person, and that with success came a responsibility to help the less fortunate.

Knowing first-hand the impact hunger has on families made Vang determined to support the Gleaners Community Food Bank of Southeast Michigan and Forgotten Harvest in Detroit.

As a restaurateur, she works with distribution channels to buy large quantities of rice, noodles, chicken and other food staples. When she finds good deals, she orders extra by the truckload for the food banks. She said she also helps small supplier companies in need of customers, so her generosity extends both ways in the food supply chain.

Vang also helps animal welfare groups. She convinced Groupon, in partnership with Bangkok 96, to donate a portion of their proceeds to the Michigan Humane Society. She provides food for Dearborn Animal Shelter fundraisers as well.

Providing food and gift certificates to local church fundraisers, whether for youth groups or causes like tsunami relief, are additional causes Vang helps.

“If there is a church function, we are happy to help because we know these churches are very important in the community and do a tremendous amount of good for people,” Vang said.

Vang said her parents instilled in her the importance of hard work and education, which helped her restaurant and frozen food line to succeed.

“Anything is possible with a good education,” Vang said.
“Not only is her food award-winning, but her heart is always looking for others to lift up,” said Wendy Fichter, Small Business Development director for the Dearborn Area Chamber of Commerce.

Vang believes that giving to others comes back in the form of a healthier community.

“We are a responsible and caring business,” Vang said. “Too many businesses think only of profits and not of humanity and their community. Without a healthy and vibrant community, we have no business.”