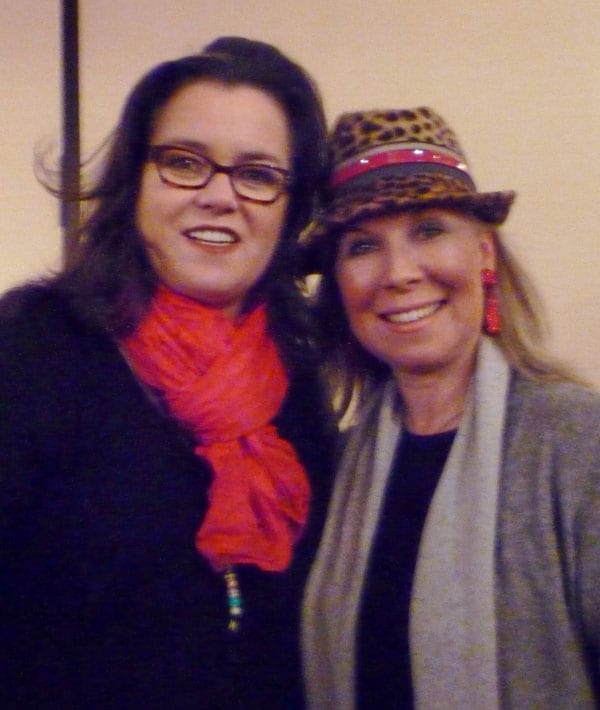 Photo by Evelyn Cairns
Rosie O’Donnell (left), former host of “The View” television show, and Shelley Dalley of Grosse Ile, for-merly of Dearborn, chat about mutual friends Melissa and Mark Militano during a celebrity “meet-and-greet” reception after the American Heart Association’s “Go Red for Women” luncheon. The Militanos, brother and sister figure skaters, represented the United States in the 1972 Olympics, placing seventh in the pairs competition. O’Donnell was the keynote speaker for the fundraiser Feb. 14 at the MGM Grand. The event raised $600,000.

By EVELYN CAIRNS
Rosie O’Donnell, the outspoken former host of the popular TV program “The View,” spoke out about heart disease Feb. 14 at the American Heart Association’s 10th annual Go Red for Women luncheon at the MGM Grand.

O’Donnell told an audience of 600 — most wearing red for the occasion — how she has regained her health since suffering a massive heart attack in 2012.

“Take care of yourself,” she advised, “because heart disease is the No. 1 killer of women.”

It’s not just a man’s disease, she added.

The speaker said she didn’t realize she was having a heart attack when, over a three-day period, she had pain in her upper arms, was feeing very tired, falling asleep and throwing up — but had no chest pain.

She walked into a hospital and was told, “We have to get you to the O.R.,” she said, and that if her left artery was blocked, she wouldn’t survive.

“I’m adamantly pro-life,” O’Donnell said, “so I told them to do anything to keep me alive, and meanwhile I was making deals with God.

“Amazingly, two months after my heart attack, my MRI showed no damage to my heart. I feel like a miracle. I almost died. I didn’t understand why I lived.”

O’Donnell shared a secret with the audience: She underwent weight-loss surgery last July at 220 pounds. She received a round of applause when she announced that she has lost 40 pounds since and that she has to lose 40 more.

When asked how her life has changed since the heart attack and weight-loss surgery, O’Donnell said that she exercises and watches what she eats.

“I can walk for an hour now instead of only 10 minutes, I take four pills a day instead of 14, eat fruit in place of cookies and no longer have cravings for food,” she said. “It feels nice to be healthy.”

Deena Centofanti, anchor and health reporter for WJBK-TV Channel 2, welcomed the guests to the heart-healthy luncheon, which raised $600,000.

DCA seeking exhibit entries
The Downriver Council for the Arts has scheduled four events in conjunction with Earth Day, which will be observed nationally on April 22.

The first event is the Earth Day Celebration Artcyled Exhibit, planned for March 21 through April 25 at the James R. DeSana Center for Arts & Culture in Wyandotte.

Works created from recycled materials of all kinds will be accepted for display. The deadline for entries is March 15 and the fee is $15 for a maximum of two entries. A free opening reception will be held at 6 p.m. March 21.

Entries also are being sought for the Downriver Indie Craft Fair, slated for March 28 and 29 at the center.

Local independent crafters, artists and designers are being sought to display their wares. A table fee of $35 will be charged for the juried event.

A $2 admission fee will be collected at the door, with proceeds earmarked for sending a child to summer art camp at the center.

On April 5, the DCA will host a fashion show and luncheon featuring one-of-a-kind creations made from recycled or repurposed materials. Prizes of $100, $75, $50 and $20 will be awarded in various categories. The entry fee is $25 ($15 for those under 17).

Tickets for the luncheon, scheduled for 11 a.m. at the Grecian Center in Southgate, are $40, with proceeds to be used for DCA programs.

Participants will be in attendance and display their entries at the final event of the Earth Day celebration: a performance of the play “Love, Loss & What I Wore” at 8 p.m. April 12 at the DeSana Center. Tickets are $15, with proceeds to fund DCA programming.