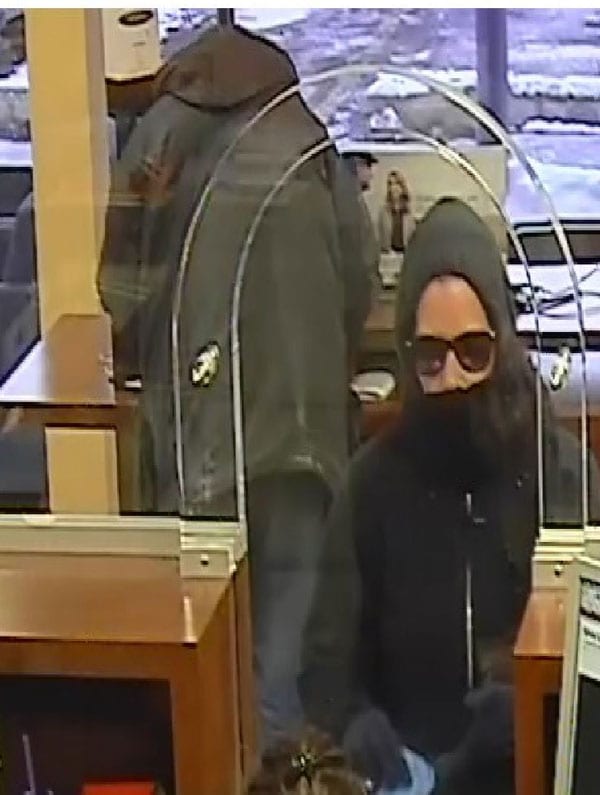 Photo courtesy of the Dearborn Heights Police Department
Police are seeking more information on this woman, who robbed Chase Bank, 23210 Ford Road, just before 6 p.m. Feb. 12. The woman also implied during the robbery that a man was outside the bank waiting for her. Anyone with information about the robbery or the pair is asked to contact Dearborn Heights police at 313-277-6770.

Sgt. Detective Stephen Gurka said the investigation is ongoing and that it may be related to other bank robberies in the area.

Police officers responded to a report of an armed robbery, and upon arriving spoke to several bank employees and other witnesses, who said a woman dressed in black with a covered face entered the bank and approached a teller.

The teller who was approached told police the woman passed a note to her stating that she was armed and that a second person, a man, was outside the bank waiting for her and the money.

The teller began putting cash into a bag and the woman stopped her, saying that it was enough and that the man outside was “crazy.”

The assistant branch manager said she witnessed the robbery and added that she locked the doors to the bank and notified police after the woman fled with the money.

Another bank employee told police he had observed the woman fleeing the bank on foot and that she entered a blue Ford minivan which exited the parking lot and traveled west on Ford Road.

Police were able to obtain surveillance footage showing the woman at the counter and also a photo of the suspect vehicle, which was given to them by a witness outside the bank who saw what was going on and took a photograph of the van with his cell phone before it fled.

No description of the man was given, but the woman was described as being white with a very small build, weighing between 100 and 130 pounds. She was wearing jeans, a black hoodie over her head, sunglasses and a scarf over part of her face. She also was wearing gloves.

Anyone with information about the robbery or the culprits is asked to contact Dearborn Heights police at 313-277-6770.