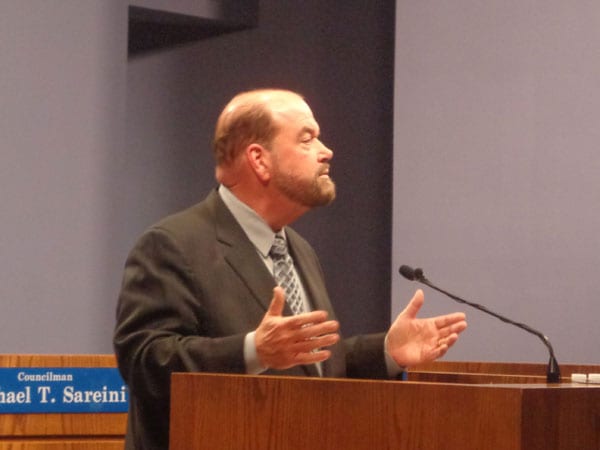 Photo by Bob Oliver
Mayor John O’Reilly Jr. delivers his 2014 State of the City address in the City Hall council chambers Feb. 26. O’Reilly said the city has continued to make progress despite tough economic times and must continue to prepare and take advantage of opportunities moving forward.

By BOB OLIVER
Times-Herald Newspapers
DEARBORN – Preparation and looking ahead to the future were the main themes of Mayor John O’Reilly Jr.’s State of the City address Feb. 26.

The speech was given in the city council chambers inside city hall.

“My personal goal is to put this city on a stronger financial footing than it is on today,” O’Reilly said. “To do that we have to ask ourselves, w’What do we want Dearborn to be?’”

O’Reilly said the state of the city has improved over the last year and pointed to a 9.5 percent drop in crime reduction, the successful merging of the city’s fire department with that of Melvindale and the usage of the Neighborhood Stabilization Program to improve the quality of city neighborhoods as examples.

He said strategic reductions in the cost of providing city services and a 25 to 35 percent reduction in staffing for the city is saving nearly $18 million a year.

He also said that moving city hall to the new Dearborn Administration Center will save hundreds of thousands of dollars every year, money that can be funneled into city services.

O’Reilly said the city government has been proactive in making difficult, and sometimes unpopular, changes that are in the best interest of the residents.

He said more work will have to be done moving forward.

“No one can know the future for certain,” O’Reilly said. “But thoughtfully evaluating relevant and available information now and combining this with trend analysis will allow us to focus our efforts and resources in ways that are most likely to produce positive outcomes.”

He said the city needs to remain well-informed and focused on clear goals if it is going to prosper in the future. He said a frank appraisal that covers the city’s assets, liabilities, challenges and opportunities that is realistic and comprehensive is mandatory.

“We can’t just grope in the dark when making cuts, seeking new revenues, or directing new investments and hope to end up with a favorable result,” O’Reilly said. “We need to define where we want to go. Then we can see what tradeoffs can be made to get us as close as possible to that vision.”

O’Reilly highlighted three ongoing projects as examples of how good planning and being prepared to take advantage of opportunities have paid off for the city: the sale of City Hall to Artspace, the building of the new Intermodal Passenger Rail station and a re-purposing of industrial sites around the city to make them more appealing to potential investors.

“Our stable government has meant that we could shepherd major and successful initiatives like these through painstaking and often lengthy processes,” O’Reilly said. “It has given us the confidence to think innovatively.”

O’Reilly said the city needs to avoid following the common governmental practice of budgeting one year and a time and that by planning ahead the city will remain an attractive place for future homeowners and investors.

“Our bottom-line mission is to keep Dearborn a desirable place where people choose to live, by taking steps to keep it an updated, modern environment, a center of commerce where businesses choose to invest and a city that has a high quality of life because of our amenities,” O’Reilly said. “A city that still offers outstanding value.”

Before the speech, O’Reilly and Debbie Dingell, wife of outgoing U.S. Rep. John Dingell (D-Dearborn), honored former City Councilwoman Nancy Hubbard, who retired in December after 24 years on the council, by showing a video dedicated to her and presenting her with retirement gifts.

Hubbard was supposed to be honored with fellow long-time Councilwoman Suzanne Sareini, who also retired in December after 24 years, during the inauguration ceremony for the city’s elected officials Jan. 2, but Hubbard was unable to attend due to illness.

She thanked residents for their support over the years and said she was very proud of her record as a member of the council.