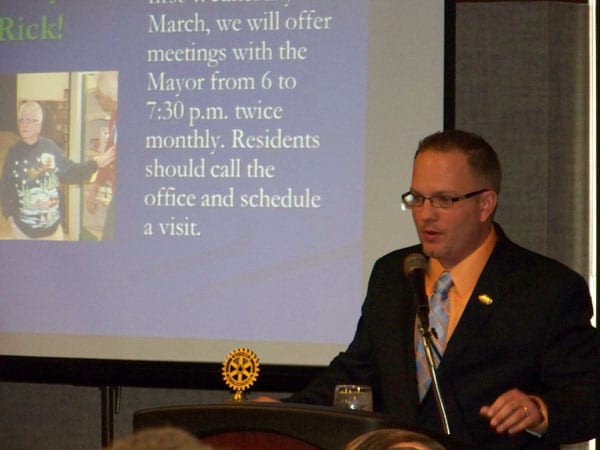 Photo by James Mitchell
The city of Taylor is well poised for recovery, said Mayor Rick Sollars during his State of the City address Thursday. Sollars said working together — at city hall and with neighboring communities — is critical to future success.

By JAMES MITCHELL
Sunday Times Newspapers
TAYLOR — It’s been about 100 days since voters elected Rick Sollars as mayor of a struggling, troubled city. That milestone made a fitting checkpoint for Sollars’ first State of the City address, delivered Thursday before a crowded room at the Lakes of Taylor golf course banquet facility.

From the beginning through the end of his nearly hour-long address, Sollars maintained a steady theme that echoed his campaign slogan — Changing Taylor Together — with teamwork needed within and outside of city borders.

“Everyone knows what lies ahead,” Sollars said. “It takes a team effort.”

Sollars didn’t avoid references to many of the city’s longstanding issues, whether financial or those generated by political motivations. “Changing Taylor,” Sollars said, begins with transforming the city’s history of political in-fighting.

“We want to get rid of the politics,” Sollars said, a comment specific to the Fire Department yet applicable to many branches of local government. Sollars admitted that the Fire Department has been, “a very large topic of discussion over the past couple of years,” but that recent changes indicate an upward trend. The city expects to extend the federal SAFER grant for another year, and will continue to look at ways of increasing staffing.

Public safety additions also have included more police officers on staff. Sollars said that four new officers will be sworn in at this week’s city council meeting, bringing the department total to near 70.

Such ambitions seemed more realistic than they might have when the city faced possible state takeover of its management, but Sollars said the budget outlook is “optimistic but cautious.” The crushing budget deficit of a few years ago that had peaked at $5.4 million now stands at $2.3 million with Taylor on its way to erasing the shortfall within the agreed-upon five years.

The city has made progress with cost-cutting measures as well — expenses have been reduced from $59.6 million annually just two years ago to a current $40.6 million. Tax revenues aren’t expected to boom any time soon. Sollars said that analysts expect it will take another 15 years before property values respond to 2008 levels, the last peak before a six-year slide began which continues today

On the other side of the ledger, new businesses have increased in recent years, including Panera Bread opening up at the former Rio Bravo site. Sollars said economic development is about bringing national brands to the city, not luring businesses away from neighboring communities.

At city hall Sollars reviewed a busy first 100 days and outlined an ambitious year. Among other projects:

• A Charter Commission has been formed to review and update the city’s current policy, which was drafted in 1966. The current charter is “antiquated,” Sollars said.

• A review of street lights after the November election estimated that more than 400 street lights — many on Telegraph — were not functioning. That number has been cut in half.

• The controversial “Call Center” will continue under the name Center for Excellence, with information sharing programs.

• The city will put forth a stronger digital presence including www.exploretaylor.com, an online database of local businesses.

“Working together,” Sollars concluded. “We’re just in the beginning. We have been fragmented for way too long. It’s time to come together and put our differences aside.”

The State of the City address was hosted by the Rotary Club of Taylor. Proceeds from the luncehon will benefit the Penrickton Center for Blind Children and the Taylor Public Schools Foundation for Educational Excellenve — which since 2012 has awarded more than $25,000 in scholarships to local students.