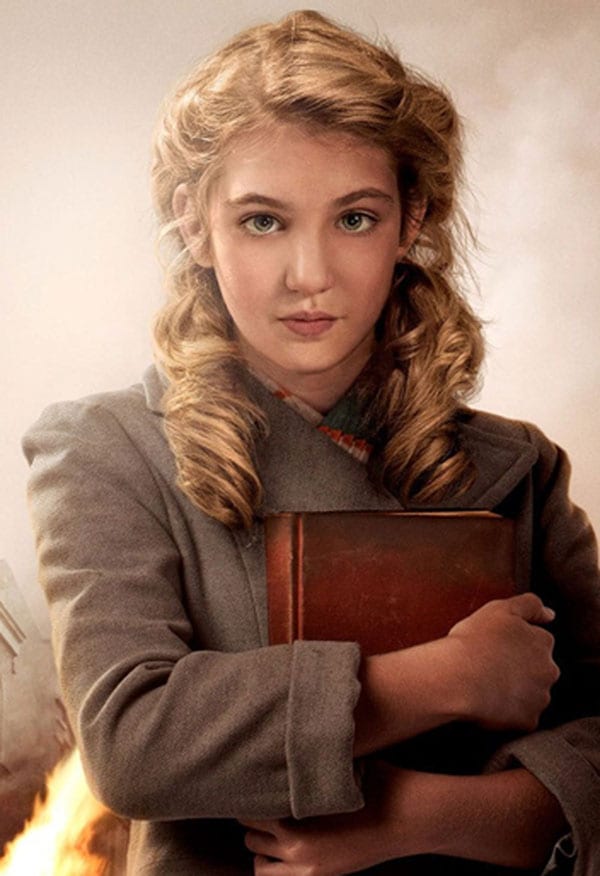 Sophie Nelisse in “The Book Thief”

PICKS OF THE WEEK
“The Book Thief” (PG-13) — During World War II, a young German girl, Liesel (Sophie Nelisse) moves in with her new foster parents. Liesel’s new home is a strange place for a kid to learn about the world: The city is wracked by war, piles of books burn in the street, and her foster parents are hiding a young Jewish man under the stairs. Liesel begins “collecting” books wherever she can get her hands on them. Through reading and writing, she’s able to make some kind of sense out of the world around her.

Based on the wildly successful young adult novel of the same title, the film tries to bring this dreamy, glossy, coming-of-age feel to the proceedings. There’s something whimsical trying to work its way through the charred setting, but it’s not getting through. It’s the performances that carry the film, especially the foster parents, (Geoffrey Rush and Emily Watson), who are complicated-but-caring people.

“Inside Llewyn Davis” (R) — It’s 1961, and New York’s Greenwich Village is the cradle of a deep and expanding folk music scene. Llewyn Davis (Oscar Isaac) is a soulful young musician who just cannot get ahead. He’s melancholy, broke, bearded, locked-out and technically homeless. He knows he might never achieve success in his artistic career. All of this happens with a sort of dark, dry humor around it.

Joel and Ethan Coen (“Raising Arizona,” “No Country for Old Men” and many more) are working with familiar themes, but taking them even further than before. The movie is no barrel of laughs, but there are moments of sincere truth, which is a necessary ingredient for a real comedy.

“Out of the Furnace” (R) — This chest-thumping revenge flick has just the right cast to make something more. Russell (Christian Bale) works at the mill in a run-down Pennsylvania steel town. His younger brother, Rodney (Casey Affleck), has returned from Iraq with head full of pain and anger. Rodney gets tied up in bare-knuckle boxing for a crime ring run by a menacing, theatrical, brutal boss (Woody Harrelson). When Rodney goes missing, the local law enforcement refuses to get involved, putting it on Russell to get justice for his younger brother.

“Broken Circle Breakdown” (R) — Didier and Elise are Belgian musicians in a bluegrass band — they love each other, Americana, playing music together and their 6-year-old daughter, Maybelle. The storytelling begins when 6-year-old Maybelle is diagnosed with cancer. The story then jumps to the moment Didier and Elise fell in love. This bizarre and beautiful cycle of sadness and joy sets the pattern for the rest of the film. Between bouts of drama and elation, the film also delivers some fine music.