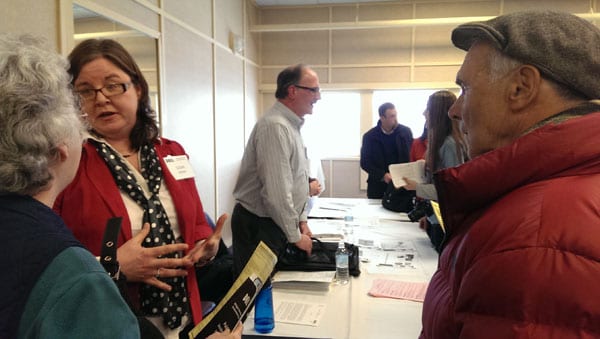 Photo by Gabriel Goodwin
MDEQ representative Susan Kilmer (second from left) and Toxic Unit Supervisor Robert Sills (third from left) speak to concerned Downriver residents after an MDEQ presentation and question-and-answer session was cut short after audience members began shouting at presenters. The two tried to explain to those who would listen the MDEQ role in regulating petcoke and preventing unnecessary contaminants into the air, water and ground. Kilmer told one person the MDEQ has six air monitoring stations surrounding the proposed site — Detroit Bulk Storage, 530 East Great Lakes St., River Rouge — and Ontario has a monitoring station of its own to monitor the pollutants in the air and ensure they do not reach the 24-hour maximum allowed by either MDEQ or Canada.

‘They think they are going to drive it out of Detroit and stick it on us?’
— Karen Ward
River Rouge Councilwoman

By GABRIEL GOODWIN
Sunday Times Newspapers
WYANDOTTE — An informational meeting held by the Michigan Department of Environmental Quality to consider a permit to install petroleum coke — or petcoke — storage on a River Rouge site met a lot of resistance from many nearby residents.

The meeting took place at the Grand Harbor Banquet Center, where MDEQ officials tried to explain their findings on the potential harm of petcoke. MDEQ officials told the public the meeting was held to address issues and questions anyone had and would share information gathered on the proposed petcoke storage.

The officials included MDEQ Toxics Unit Supervisor Robert Sills who spoke throughout most of the meeting and was interrupted several by residents who said they are outraged by the situation and demanded more answers. One woman demanded the MDEQ give her evidence from at least five studies done on the petcoke and its effects on the environment.

“You seriously can’t give me five studies,” she asked when SIlls said he could provide two studies. “I figured you couldn’t because the last two studies conducted were in or before 1997.”

Not only were residents of the surrounding communities gathered to hear what information would be presented, but Wyandotte and River Rouge city council members attended as well. River Rouge Councilwoman Karen Ward said the proposed location would be at Detroit Bulk Storage Inc., 530 East Great Lakes St., which would be a “terrible location” because the location is about a quarter mile from a school and residential area.

“They think they are going to drive it out of Detroit and stick it on us?” she said. “We aren’t going to allow that and will do everything we can to keep it out. We don’t want it around our children or our senior citizens. We passed a resolution (Tuesday) stating the city doesn’t want it here at all. I hope they don’t put it in River Rouge or anywhere Downriver.”

The resolution said petcoke piles have a history of generating dust clouds that settle on cars, boats, windows, and any surface in the effected area. River Rouge already is burdened with elevated levels of industrial pollutants and heavy industrial truck traffic, Ward said, so the idea of allowing the transportation and storage of petcoke in the city would only “amplify a bad situation.”

“The trucks would transport petcoke directly through our downtown, then alongside a residential neighborhood,” she said, “so, the city and its residents are strongly against the storage and transport through or anywhere near our neighborhoods, parks or river recreation areas.”

Sills said any source of dust emissions can raise health concerns if the exposure levels are high enough, but the MDEQ has guidelines and rules in place to protect residents from those amounts. The contaminant the MDEQ was worried about was amount of nickel in the dust, Sills said, although it is found in most soil in the area.

“The concentration of nickel — an element found in petcoke, which is not a cancer-causing but could be toxic at higher levels — is about 128 parts per million,” he said. “Nickel is also found in topsoil, so it isn’t uncommon to be present in most parks, schools, and at-home gardens, but at a substantially lower — in a range of about 2.41 ppm to 39 ppm.”

The presentation did not provide information about whether the MDEQ would grant the permit because the town-hall-style discussion of the petcoke was announced to be “out of hand” by several MDEQ officials.