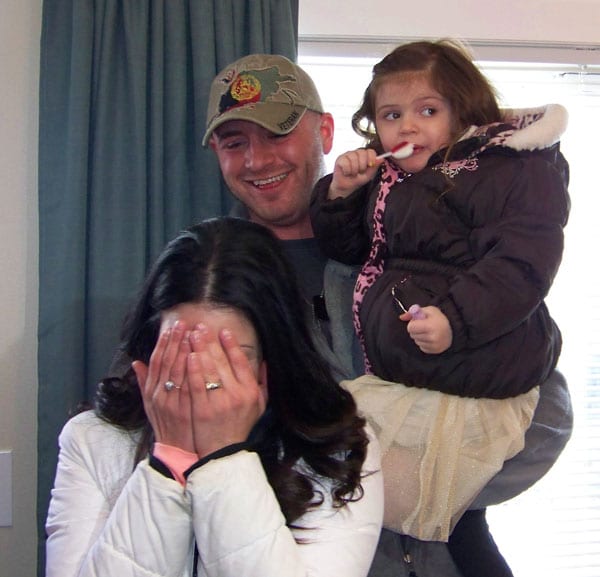 Photo by James Mitchell
New homeowners Darcy (left) Christopher and Vada Holcomb react after realizing the house they’d just entered would be their new home. The Holcombs were awarded the second residence to be rehabilitated by the city of Taylor and Home Depot Foundation.

‘For the community I grew up in to be giving this much back to me is amazing.’
— Christopher Holcomb

By JAMES MITCHELL
Sunday Times Newspapers
TAYLOR — It was a homecoming in more ways than one Thursday.

In a quiet residential area on Polk Street, Taylor native and former Marine Christopher Holcomb fought back tears as he addressed a crowd that had gathered to welcome him to his new home.

“For the community I grew up in to be giving this much back to me is amazing,” Holcomb said.

A new residence for Holcomb, his wife Darcy and 3-year-old daughter, Vada, was just the beginning of a surprise housewarming party. Holcomb learned he’d been awarded the second house that had been rehabilitated courtesy of the Taylor Veterans Home Program, the Home Depot Foundation and dozens of volunteers and organizations.

The surprise part was that Holcomb only had been told that he was a finalist for the house. The family was driven to the house under the pretense that a documentary was being filmed, so they weren’t too alarmed when they pulled into a driveway filled with camera crews and a podium.

Moments later, however, the Holcombs stepped inside and found that relatives had helped prepare the rooms with family pictures and Marine mementos. Terry Grahl and volunteers from Enchanted Makeovers turned the house into a home with furnishings and design work worth several thousand dollars.

The Holcombs were at home, in the same community they’d met when Christopher and Darcy were seventh-graders. Darcy said Chris was the “first boy to ever send me flowers,” which he did on her 12th birthday.

That they would marry seemed a certainty, and the couple could have stayed in Michigan had Christopher accepted a baseball scholarship to Wayne State University after graduating from Kennedy High School in 2007. Christopher instead enlisted in the U.S. Marine Corps in 2008, inspired by a sense of patriotism and wanting to serve his country before settling down.

He did, however, propose to Darcy soon after graduating from Marine training, a proposal made behind a local Dairy Queen along the banks of a stream.

The couple married in 2009, and two months later Christopher made the first of three overseas deployments. He was in Afghanistan when baby Vada — named for the lead character in the movie “My Girl” — took her first steps, one of many “firsts” that were sacrificed.

Chrisopher was honorably discharged in 2012 after receiving shoulder and knee injuries during a training accident. Back home he found a struggling economy and bleak employment prospects.

On Thursday, the Veterans Home Program made a new life for the Holcombs possible. Along with the new home, Christopher will soon begin work at Barton Malow, having been awarded a carpentry apprenticeship, with training supplemented by the nonprofit group Helmets to Hard Hats. Further down the road, Vada on Thursday was awarded a scholarship to attend Schoolcraft Community College upon completion of high school.

Rodney Harris, manager of Home Depot Store 2789 and Veterans Home Project manager said awarding the Holcombs the key to their house didn’t mean that the program is finished.

In the past five years Home Depot has contributed more than $80 million to assist veterans, and the community stood ready to support those who defended a nation.

Home Depot and the city of Taylor have been assisted by 32 partner organizations which have contributed tens of thousands of dollars in labor and supplies.