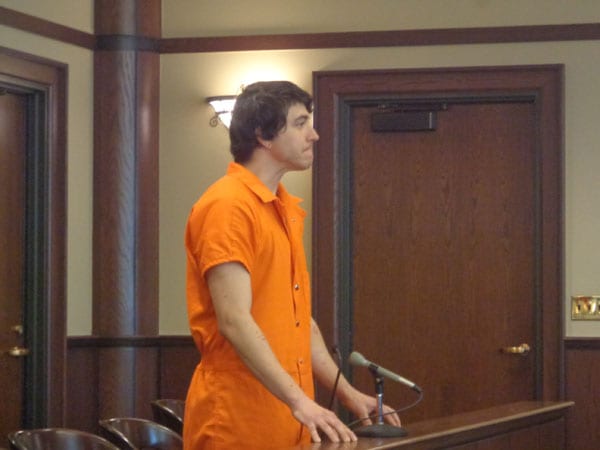 Photo by Bob Oliver
Eric Michael Leighty, 24, of Dearborn Heights is arraigned on charges stemming from a hit-and-run crash that injured three children. Leighty is facing six charges, four of which are felonies, for the incident, which occurred near the intersection of Telegraph and Colgate at 2:25 p.m. March 7.

By BOB OLIVER
Times-Herald Newspapers
HEIGHTS — A 24-year-old resident awaits a preliminary examination of the evidence against him for charges stemming from an alleged hit-and-run that sent three children to the hospital earlier this month.

The two operating with a suspended license and failure to stop counts are felonies with penalties of up to five years in prison and a $5,000 fine while the operating second offense charge carries a penalty of up to one year in prison and a $1,000 fine.

The moving violations are misdemeanors that carry penalties of up to 93 days in jail and $500 fines each.

Leighty is next scheduled to appear in court for a preliminary examination at 9 a.m. Wednesday before Turfe.

The incident occurred near the intersection of Telegraph Road and Colgate about 2:25 p.m March 7.

Police Cpl. Leonard Stewart said a burgundy vehicle allegedly being driven by Leighty was traveling east on Colgate when it struck a silver Buick traveling south on Telegraph. After the impact the Buick continued until it struck a utility pole near Telegraph and Stanford.

Three children, aged 4, 7 and 8 years old, inside the Buick were transported to Children’s Hospital of Michigan, where two remain in serious condition. The third was treated and released.

“They are showing improvement, that’s the best way to put it,” Stewart said.

He said the children were wearing seat belts but not booster seats.

The aunt of the children, who was driving the vehicle, sustained minor injuries in the collision but was also released.

The burgundy vehicle drove away from the scene before authorities arrived.

Stewart said that tips from the public led to the Leighty’s arrest the next day.

“We had a tipster call after hearing about the incident through local media,” Stewart said. “They observed a similar vehicle with damage and called the police department to report it.”

Police responded and compared vehicle parts that were left at the scene of the accident to the suspect vehicle and concluded that they were a match.

Leighty was taken into custody without incident and did not report any injuries from the collision.

Alcohol and drugs are not suspected to have been a factor in the crash.