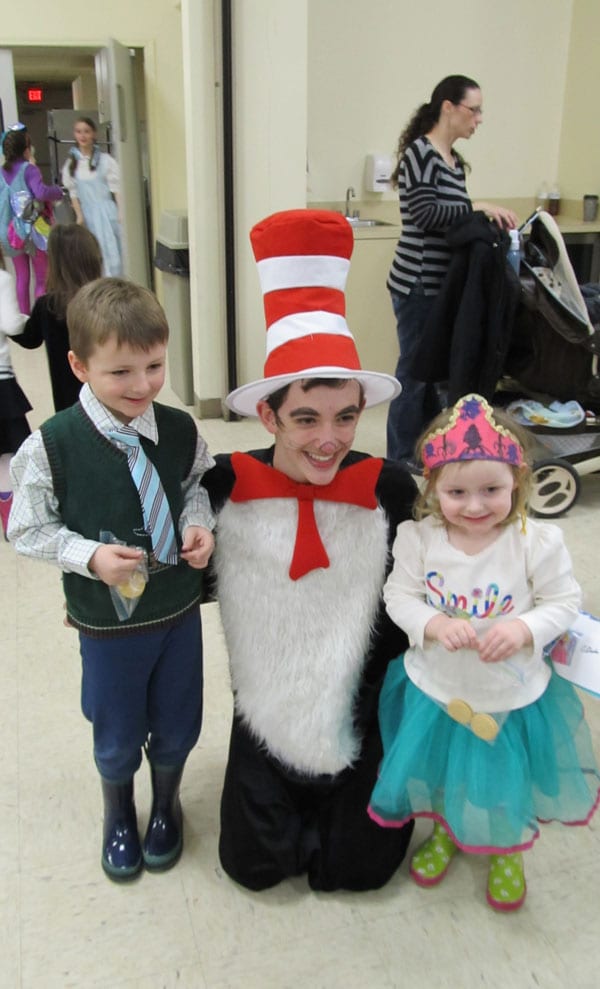 Photo by Sue Suchyta
The Cat in the Hat, portrayed by Downriver Youth Performing Arts Center member Xander Fleming, 15, of Grosse Ile Township, poses with two young fans during a literacy event March 8 held by the Trenton Rotary Club at the Westfield Activity Center in Trenton.

By SUE SUCHYTA
Times-Herald Newspapers
TRENTON – Captain Rotary is not well known, but when Noel Jackson dons his cape to collect books for underserved children’s libraries, he becomes a storybook superhero to children he never meets.

By donating a new or used book or $5, children met with characters for autographs, stickers and photos, participated in a book-related craft and listened to stories read aloud by their storybook heroes.

Children watched in wide-eyed amazement as princesses, superheroes and storybook friends walked around the room, smiled at them and offered friendly hellos and hugs. Some needed a moment to overcome their hesitation, while others eagerly accepted the friendly attention of the literary legends.

Parents grinned as they snapped posed photos of their amazed and awed offspring, while the storybook characters made small talk with the young participants to set them at ease.

Jackson and his wife, Debbie, launched Characters Come Alive last year. As co-founders of the Downriver Youth Performing Arts Center, and with Noel Jackson then president of the Trenton Rotary, they combined costumed storybook characters from both groups to entertain local children, while collecting books and raising funds to benefit underserved children’s libraries in southeast Michigan.

“They totally embrace the characters,” she said. “They are very real to them. Last year we were trying to think of a creative literacy project, so we combined our DYPAC talent with our Rotary enthusiasm and this is what we came up with.”

She said superheroes and princesses are most popular with the children.

“Captain Rotary is a metaphor,” he said. “When you become a Rotarian, you do become a superhero, because you become so much more powerful than you were before in terms of people helping you to get things done. I like to think that we all have a superhero inside of us, and through Rotary we get to have the superhero come out.”

Promoting literacy is one of the four aims of Rotary International, along with providing fresh, drinkable water, supporting maternal health causes, and fighting hunger and disease worldwide.

DYPAC member Elizabeth Rutkowski, 14, of Riverview, who plays Princess Aurora/Briar Rose from “Sleeping Beauty,” said it is fun to interact with the young participants while supporting a worthy cause.

“It’s exciting to see the looks on their faces and to see all kids come together and get excited about reading,” Rutkowski said. “It is really nice to do something like this.”

She said the smile on some of the youngest children’s faces lets her know that they think she is the real character, and she gets many hugs from them.

DYPAC member Allison Balan, 15, of Flat Rock, who plays Belle from “Beauty and the Beast” said that after the children get over their initial shyness they will smile and engage with the characters.

“I’ve always wanted to be a princess, and I get to live out my dream,” Balan said. “I love seeing all the little kids happy.”

Surprise, excitement and a desire to pose with her wand are what storybook character Pinkalicious, played by Holly Eggleston, 28, of Southgate, a DYPAC alumna, encounters.

She said the children warm up once they have a chance to check out her costume pieces, which include feather-trimmed wings.

In addition to meeting their young fans, DYPAC members Bailey Shaver, 16, of Grosse Ile Township and Madeline Balavitich, 15, of Wyandotte, who play Woody and Jessie, respectively, from “Toy Story” enjoy portraying their characters at other charity fundraisers.

“It’s so rewarding for them to come in and see their favorite character brought to life,” Shaver said. “It just makes you feel good, like you are making an impact on the community.”

As a 10-year DYPAC veteran, Jaime Cochran, 15, of Dearborn Heights, who plays Anna from “Frozen,” said she finds both aspects of the event rewarding: meeting the excited children and helping a worthy cause.

DYPAC member Jacob Krulikowski, 12, of Monroe, who plays Peter Pan, has volunteered at two literacy events and a Habitat for Humanity fundraiser in character. He said he likes walking around and greeting the children, watching their reactions, and reading stories to them as part of the literacy aspect of the event.

“Reading has always been a big part of my life, and we decided we could combine DYPAC with Rotary and collect books for those who need them,” Zaleski said.

She said they had collected two big boxes of books during the first half of the event.

She said the children from DYPAC enjoy playing characters, and she enjoys watching the young children engage with them.

“The little ones’ eyes get really big, and it’s like wow, something they have seen in a book is actually here, walking and talking and signing autographs and giving stickers,” Zaleski said. “I am hoping that this event can continue, because everybody seems to be loving it here, and we love to do it and it promotes reading.”