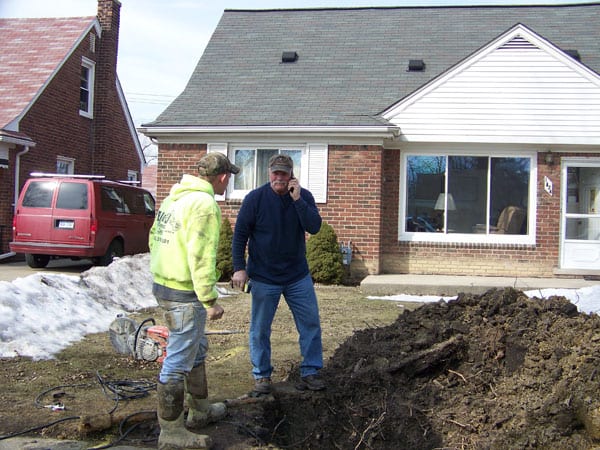 Photo by James Mitchell
Plumber Ed Collins reports on the status of repairs at the home of Stanley and Johanna Laba, who had been without running water for nearly two months. Collins and crews from RJ&J Enterprises spent most of Tuesday fixing a frozen pipe and service was restored that afternoon.

By JAMES MITCHELL
Sunday Times Newspapers
LINCOLN PARK — Service was restored Tuesday to the home of a senior couple who — despite being 90 years old — had gone without running water for weeks.

Stanley and Johanna Laba instead made do through winter weeks by hauling inside buckets filled with snow, which they boiled to use for bathing and flushing toilets. A neighbor pitched in and brought filled pitchers and bottled water to the couple in the 1800 block of Moran while they waited for answers.

The Laba house was the only home on Moran to have water issues, and Director of Public Services Bob Bartok confirmed Tuesday that the line heading into their home had froze, the singular line that reportedly had been edged above the frost line by a city-owned tree in the easement.

Laba reportedly had been told by city officials that the problem was his to fix, although he had believed that previous city-contracted work in the area disrupted the water line.

The couple struggled through the harshest winter in half a century with the help of neighbors before their story gained local attention on a Detroit news station, followed by an outpouring of support at Monday’s regular meeting of the city council.

Bartok — who was at the house Tuesday afternoon supervising contractors hired by Lincoln Park — said the city took action once the matter was made known.

By 4:30 p.m. service was restored after contractors with RJ&J Enterprises spent the day clearing and heating the water line.