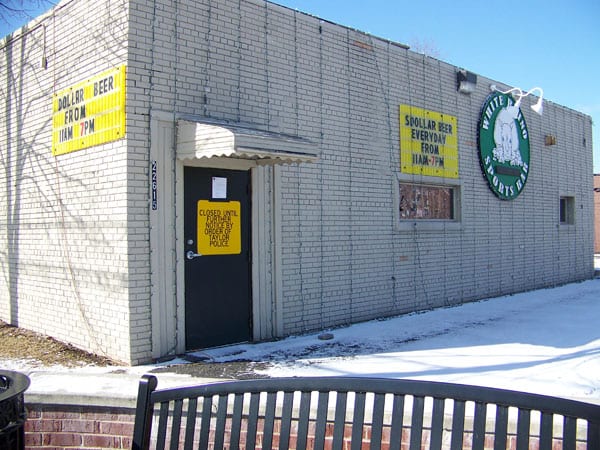 Photo by James Mitchell
Signs posted March 23 notified owners of the White Rhino that the business will remain closed until numerous building and business code issues are addressed.

By JAMES MITCHELL
Sunday Times Newspapers
TAYLOR — Closing a local business is not a decision taken lightly by city officials, but Mayor Rick Sollars said threats to public safety will not be ignored.

“This has opened our eyes up,” Sollars said. “I have zero tolerance for this.”

The White Rhino bar, 22615 Goddard, was ordered closed by Police Chief Mary Sclabassi March 23. A letter from the city was attached to the door notifying owners and customers of the closure. Dated March 23, the letter capped a weekend of activity at the sports bar that had been monitored by police.

Sollars said the latest issue at the bar — reports of shots being fired in the parking lot earlier this month — sparked a city investigation. What was discovered was more than enough to order the business closed, Sollars said.

“There’s been several complaints from the surrounding neighbors,” he said. “We couldn’t get a lot of information out of the owners, and there was an outcry at the next council meeting.”

The week before the closing, bar patrons included several undercover police officers who made note of a number of issues at the business.

“They did not have a certificate of occupancy,” Sollars said. “No business license, and they were over capacity.”

On March 21, Sollars said the officers counted more than 180 people in the bar — a number confirmed when the bar was ordered closed and departing customers were counted — more than twice the maximum capacity of 90 as set by fire officials.

The recent incidents were the latest in a history of problems at White Rhino. A bar fight included gunshots a year ago, another patron had been victim of an attempted car-jacking in early 2013, and Sollars said that the late-night gunshots earlier this month were the latest and final straw.

The investigation provided several reasons for ordering the closure. The bar’s new owners had not applied for or received a certificate of occupancy or business license.

“They have to bring the site into compliance,” Sollars said. “There were electrical and light violations, the parking lot needs a massive overhaul. There’s quite a bit of work for them to do.”

An inspection by the city Fire Marshal likewise uncovered building code issues. Sclabassi’s letter advised the owners that, “These violations are also being forwarded to the Michigan Department of Licensing Liquor Control Division.”

Sollars said the owners will be given the opportunity to re-open provided city and state guidelines are met.

“We can’t terminate them as a business,” Sollars said. “They have the right to make changes and come back, but we need them to uphold the building and occupancy codes.”

Reaction to the closure and issue has been mixed. Lena Gjoka — who took over the business in October 2013 — appeared at a city council meeting earlier this month asking for time to make the needed adjustments. Some have said the city overstepped its authority, but Sollars said there had been too many complaints and too many issues.