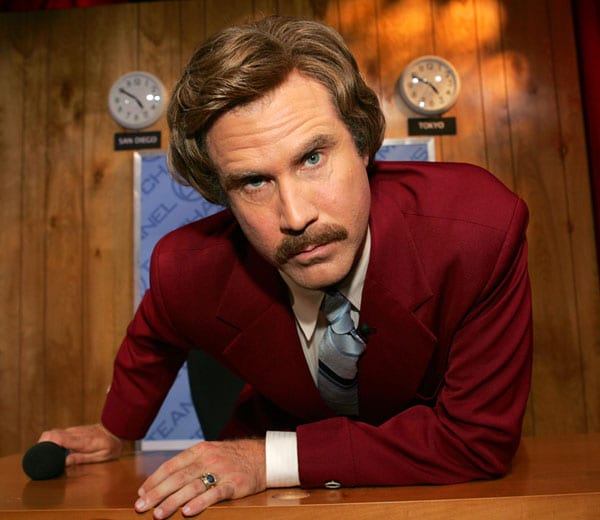 Will Ferrell in “Anchorman 2”

PICKS OF THE WEEK
“47 Ronin” (PG-13) —  After their master is betrayed and forced to commit suicide, 47 samurai warriors vow to get revenge. Kai (Keanu Reeves) is a half-breed who will somehow play an instrumental role in vanquishing the supernatural evil that awaits the ronin. Set in a dour and mystical version of feudal Japan, the titular warriors must do battle with a sly sorceress (Rinko Kikuchi) and a limping plot.

Really, for an action-adventure story about revenge and shape-shifting monsters, this film is kind of a bummer. None of the samurai get to be three-dimensional characters. Reeves looks committed to his role as the honor-bound servant, but even he seems like he’d rather be in a different movie.

“The Bag Man” (R) —  Jack (John Cusack) is a hitman with a simple task: pick up a bag, take it to a seedy hotel in the middle of nowhere, and wait for his boss to come pick it up. Oh, and do not look in the bag, under any circumstances. Things go awry from the start, and Jack arrives at the creepy hotel with a body in his trunk and a bullet hole in his hand. A steady trickle of bizarre characters appear as the body count piles up.

Robert De Niro plays Dragna, the crime boss who tends to blather on with pseudo-philosophical nonsense. With a script this full of weirdness and unearned violence, you really get the idea that Cusack and De Niro weren’t interested in the project for its artistic merits.

“Anchorman 2: The Legend Continues” (PG-13) —  Ron Burgundy (Will Ferrell) and his crack news team return for more absurd, man-child antics. The last movie left off with Ron on top of the world, married to his beautiful rival/co-host, and the toast of San Diego. Seven years later, the decadent ’70s are over, and Ron must reassemble his original news team to take on an early 24-hour news channel. Ferrell and director/friend Adam Mckay follow the same formula that worked in the past —  let funny people improvise their way through the scenes and see what makes people laugh.

“Knights of Badassdom” (R) —  Three friends (Peter Dinklage, Steve Zahn and Ryan Kwanten) are out LARPing (that is Live-Action Role-Playing, or dressing up like fantasy adventurers and fighting outside with foam swords), and it’s all going well until one of them recites a spell from an old book bought online. Suddenly, the pretend warriors are threatened by a real succubus from real Hell. It’s an oddball comedy made with loving care for geeks and the people who love them.