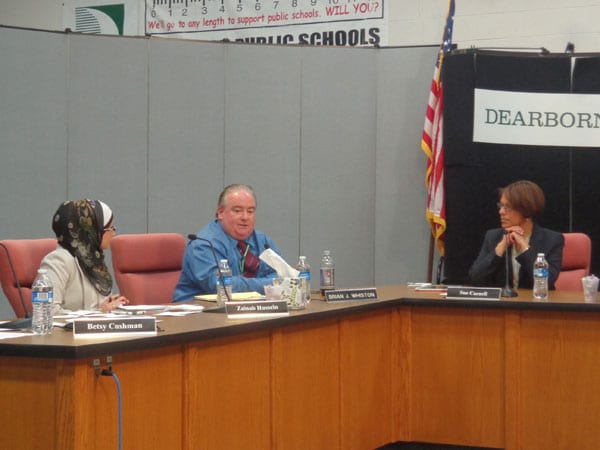 By BOB OLIVER
Times-Herald Newspapers
DEARBORN – How students and schools become known as “at-risk” and what is being done about it were topics under discussion during a League of Women Voters Dearborn-Dearborn Heights community forum March 25.

The forum was held in the Dearborn Public Schools Administrative Center.

Superintendents from all four public school districts in Dearborn and Dearborn Heights were on the panel, as were Wayne Regional Educational Service Agency Supt. Christopher Wigent and state Supt. Michael Flanagan.

Flanagan said that “at-risk,” according to the state of Michigan, means that the children in school are at risk for not meeting the state standards in testing.

He said there are many reasons for a student to fall into this category, either through social-economic reasons or because a lack of knowing the English language, and that to categorize students is not easy.

“Students can be at risk in some areas but not in others, so there’s a problem with the labeling in some respects,” Flanagan said. “It’s one thing to define them as at risk, we’ve got to get beyond that and actually help them. It’s a matter of strategy and intentional action.”

He added that the home life of the students plays a large role in the student’s education because if the family is too poor to provide books to the child or three meals a day, the student is coming to the school at a disadvantage.

“I was amazed coming to the department in 2005 at how many kids were just hungry every day,” Flanagan said. “It’s really difficult to learn if you’re hungry.”

He said federal program money is available for offering free or reduced food to students and that more districts are taking advantage of it.

DPS Supt. Brian Whiston said the district has done a lot of work to identify students who may be at risk.

“There are different ways we look at students as potentially being at risk,” Whiston said.

He said students comes under notice if they are struggling in one or more of their subjects and that the school immediately starts working with the students, both through their teacher and through intervention specialists, to help them catch up and understand the material.

“We work with our students to make sure that their individual needs are met so that they can reach their academic goals,” Whiston said.

He also said the district has parent contracts that are used for students who are two or more years behind in reading or math. In the contract, the district reaches out to the parents and advises them of what they can do to help get their student back on track and outlines how the school will help them.

“The key is to let each student set their educational goal and then understand where they are currently performing at, where they should be performing at and helping them attain their goals at any grade,” Whiston said.

DPS is the third largest district in the state with about 19,500 students.

“We have to provide options for our students because we don’t know where the next (Apple Inc. co-founder) Steve Jobs is going to come from,” Carnell said. “We want to be able to prepare our students for any job that comes later on.

“We have found that a lot of the students who are at risk are the ones who have not been successful in the traditional program because it just doesn’t fit their need,” Carnell said.

Dearborn School District 7 Supt. Jeffrey Bartold said he has tried to stay proactive rather than reactive with at-risk students in the district.

“We have intervention specialists in the middle and high schools and we also use a variety of programs to help keep students on track,” Bartold said.

He cited the district’s daily after school at-risk tutoring program and a new Zeros Aren’t Permitted program as key tools that have helped reduce the failure rates in middle school math and English Language Arts by 23 percent over the last year.

“They two programs are just examples of many that we are currently using to make sure our students are successful,” Bartold said.

Like the other superintendents, Crestwood School District Supt. Laurine VanValkenburg said her district has used a combination of in and after school programs to help struggling students.

All of the superintendents said there is no one thing that would make sure that no more students become at-risk students, but all also agreed that the earlier the schools can start developing good academic skills in students and keep an open dialogue with families to make sure that parents are also helping in the education process, the better.

“There is no doubt that parents play a very key role in the success of our students,” Whiston said. “We work as a team with all our families to do what’s best for the student.”

Flanagan believes many of the problems that repeatedly occur in at-risk students can be taken care of in early childhood education.

“We’ve got to re-think the way we’ve organized our structure,” Flanagan said. “We really need to put a lot of our focus on kids pre-kindergarten up to 13 years old. We need kids coming to our schools ready to learn.”

He said additional funding in education from the state would go a long way in helping lower the number of students at risk.

“I think we can be ineffective if we think that all of the answers will happen because of money, but in some of these cases it is just apparent that success is resource driven,” Flanagan said.

He said state funding for public schools has been reduced by about 12.5 percent over the last 10 years.