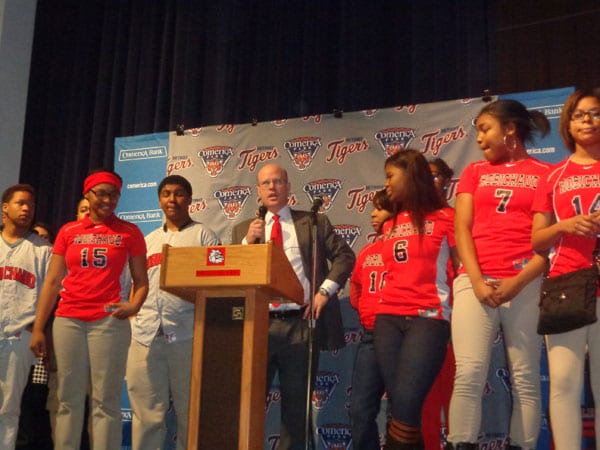 Photo by Bob Oliver
Comerica Bank of Michigan President Michael Ritchie (center) is surrounded by members of the Robichaud High School varsity baseball and softball teams as he announces that school is one of two chosen in the state to receive the $10,000 Grand Slam Grant. RHS Athletic Director Vernon Crump said the money will be used to restore and repair the baseball field.

By BOB OLIVER
Times-Herald Newspapers
HEIGHTS — Baseball weather is almost here and student athletes at Robichaud High School got the surprise of the season Thursday when they were called to an assembly to hear the announcement that their school won a $10,000 grant from Comerica Bank.

The students were visited by Detroit Tiger’s mascot Paws and representatives from Comerica Bank of Michigan, who made the formal announcement that the school was one of two in the state that would be receiving a Grand Slam Grant.

The Tigers are a partner of Comerica in the project and have helped select the winning schools each of the last four years when the grants were awarded.

Robichaud Athletic Director Vernon Crump said the school has applied for the grant the last three years and was completely shocked to hear that they had won.

Crump said the school plans to use the money to rehabilitate the baseball diamond next to the football field.

“The field has been out of commission for a really long time, at least 10 years, so that will be our focus with the grant money,” Crump said.

He said the baseball and softball teams have been practicing and playing at the baseball diamond at Thorne Elementary School in recent years.

“Using this money to fix up our field will be really good for our players,” Crump said. “They will have a field they can really be proud of.”

Also, as part of the award, the school was given 60 tickets for baseball and softball players to go to Comerica Park to be recognized on the field prior to the April 5 game against the Baltimore Orioles.

In addition to the tickets, Crump was also given a Rawlings baseball from Comerica Bank of Michigan President Michael Ritchie to be thrown out as the ceremonial first pitch at the game.

Crump said after the event he would be ready for the pitch with the eyes of not only his students, but a packed Comerica Park, on him.

RHS Principal James Konrad said he was very happy for the school and athletic program.

“This is something we really need here and it will definitely help us continue our rich tradition of athletics,” Konrad said. “It’s very exciting for all of us.”

He said it was tough keeping the students and faculty in the dark about the coming announcement but said that he felt his efforts were successful.

“It was a tense few days, but luckily we were able to keep it under lock and key,” Konrad said. “We thought it would be that much more exciting for the students to be taken off guard and surprised by the announcement.”