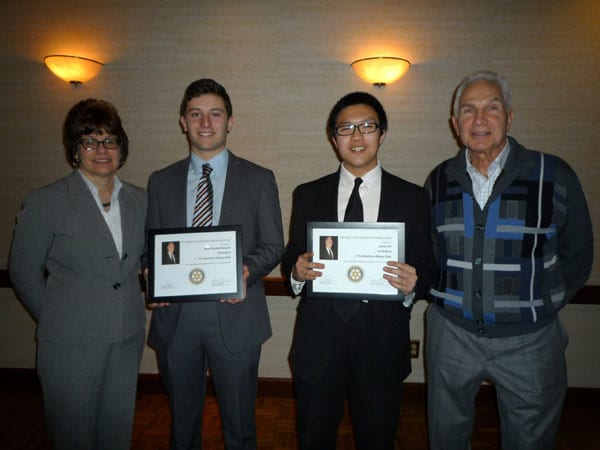 Criteria for winning the scholarship include application of the Rotary 4-Way Test — a guideline for decisions, academic achievement, leadership in class and extra-curricular activities, community service, plus honors and awards.

In addition to maintaining high academic standards, Kadouh was involved with peer mentoring, ACCESS Acts group, and Teen Grant Making initiative. Kadouh has served as class president for four years, captain of the varsity football team, lettered in golf and was founder and president of Aspiring Medical Professionals.

Lin, in addition to maintaining high academic standards, has volunteered more than 200 hours at Oakwood Hospital; tutored more than 40 hours in math, science, and languages; volunteered 20 hours assisting teachers; and shadowed a cardiologist over 100 hours. Lin is a leader in the school orchestra, earning a Dearborn Youth Symphony Scholarship. He received the Michigan Math Prize competition award, and first place in the German for All competition at the University of Michigan.

At the luncheon honoring both recipients, the students addressed club members. They noted how grateful they were not only for the financial support of the scholarship but for the belief it signifies in their goals and future success.

The club also sponsors an annual golf outing and banquet to raise funds for the scholarships, awarded to high school seniors attending a public or private high school in the Dearborn Public Schools boundaries.

Archer, a longtime Rotarian and Dearborn resident who died in 2005 at the age of 91, was a registered professional engineer whose many achievements included inventor, scientist, entrepreneur, banker, businessman, attorney, ham radio operator, sportsman and humanitarian.

He was a Dearborn Rotarian for 54 years, held several leadership positions in Rotary, and served as president of Rotary International, the world’s largest service organization with more than 1.2 million members.

In addition to his Rotary service, Archer was active locally with the YMCA, Boy Scouts of America, DPS and Henry Ford Hospital.

The scholarship process is web-based with an online application available at www.DearbornRotary.org. All communications are handled via email and applications are judged by three club members. This year, the selection committee reviewed 12 applications.