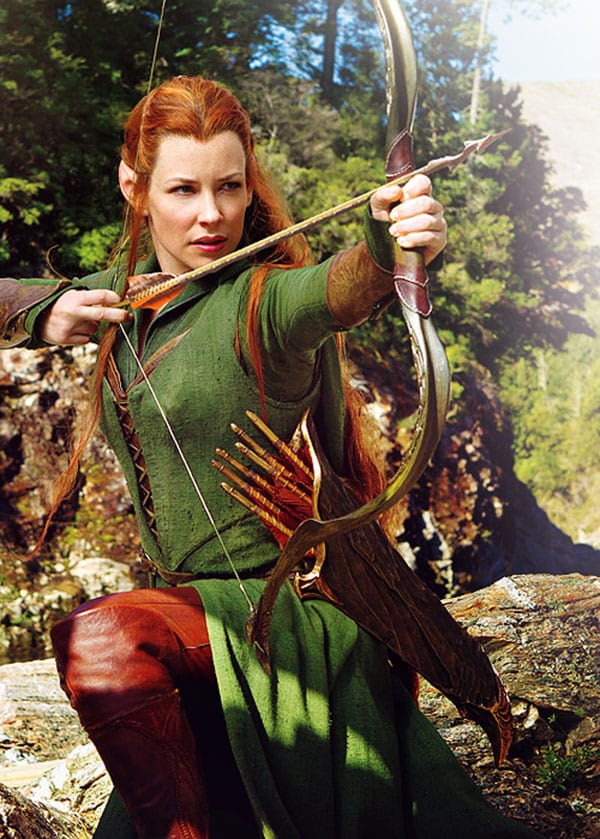 Evangeline Lilly in “The Hobbit: The Desolation of Smaug”

PICKS OF THE WEEK
“The Hobbit: The Desolation of Smaug” (PG-13) — Bilbo Baggins (Martin Freeman) and his dwarf companions continue their quest to defeat a dragon and reclaim a kingdom in the second piece of the trilogy. When last we left Bilbo, he had just picked up the golden Ring from Gollum. Now the short crew continues through hostile elven woods, into the town of Lake-front, and then on to the Lonely Mountain for the first face-off with Smaug the dragon — with a lot of cameos and action in between.

If the first film was all packing luggage and pointing at maps, then this film is all water-slides and daring escapes. The story includes much more Middle-Earth lore than Tolkien ever included in the novel. A new character, an elven huntress named Tauriel (Evangeline Lilly) is one of the more galvanizing additions.

“August: Osage County” (R) — In a dusty old Oklahoma home, the dour relatives of the Weston family gather together in a time of hardship. This makes them easier targets for the acid-tongued, viper-eyed, knife-twistingly sadistic quips of the family’s matriarch, Violet Weston (Meryl Streep). While all members of the family get their fill at the table, it’s the oldest daughter, Barbara (Julia Roberts), who shows that she’s learned the most from her mother.

This is pitch-dark comedy about the unbreakable bonds of family love, and how they can be used to suffocate one generation after another. The movie is adapted from a Pulitzer-Prize winning stage drama. Expect to be emotionally drained in exchange for a few laughs.

“Grudge Match” (PG-13) — Robert De Niro and Sylvester Stallone star as boxers with a decades-old rivalry ripe for one last match. If you’re expecting the dramatic equivalent of Raging Bull vs. Rocky, then you’ve played right into their hands, and you deserve the sucker punch. Billy “The Kid” McDonnen (De Niro) and Henry “Razor” Sharp (Stallone) were A-list prizefighters in their day, but each one has spent the past 30 years out of the ring. The son of a shady fight promoter (an electric Kevin Hart) gets the old timers to gear up for one last bout. What this movie lacks in heart (which is considerable) it tries to make up for with prostate jokes.

“Paranormal Activity: The Marked Ones” (R) — Recent high-school grad Jesse (Andrew Jacobs) and his pal Hector (Jorge Diaz) are enjoying a summer of illicit fun in their native Los Angeles, when they decide to investigate the mysterious death of Jesse’s downstairs neighbor. Turns out she was a witch, and she had a particular interest in Jesse, who starts to show symptoms of demonic possession. This spin-off of the popular horror franchise dabbles with a new setting and new mythology. The scares are the same ol’ jump-out-of-your-seat shocks, though maybe less effective since they’ve become so predicable.