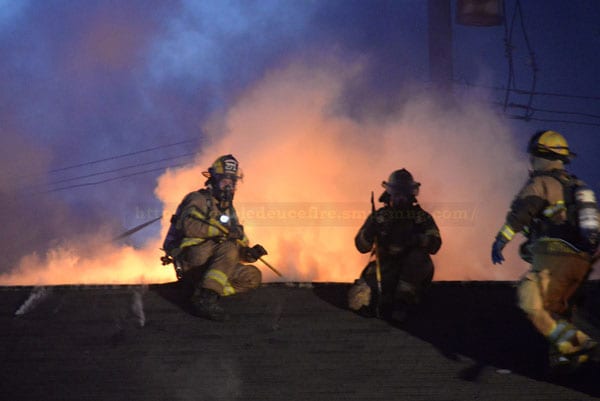 Photo by Ian Kushnir
Firefighters extinguish the blaze at the Motown Inn and Suites, 17255 Raupp Road in Melvindale March 26. Fire investigators deemed the cause electrical.

By tereasa nims
Sunday Times Newspapers
MELVINDALE – The single-story Motown Inn and Suites is gone after a March 26 fire that raged through the building which fire investigators deem electrical.

Dearborn Fire Chief Joseph Murray said the investigation is closed on the motel, 17255 Raupp Road, where 24 firefighters battled the blaze, which took three hours to bring under control.

“When I got there, flames were shooting 30 feet above the roof,” Murray said.

He said two rooms at the U-shaped motel were salvaged, but there was extensive damage to the remaining part of the hotel. All seven people at the hotel, including one manager, made it out safely.

Murray said the electrical fire started in a mechanical room and spread through the attic.

The fire was called in at 7:58 p.m. and firefighters
arrived at 8:02 p.m. Firefighters waded through the heavy smoke to the roof to ventilate the attic.

“We had guys on the roof the fastest we could in an effort to contain the fire,” Murray said.

Jacob Keel of Melvindale witnessed the fire.
“It was outrageous,” Keel said.

As of presstime, it’s unknown if the managers plan to rebuild. 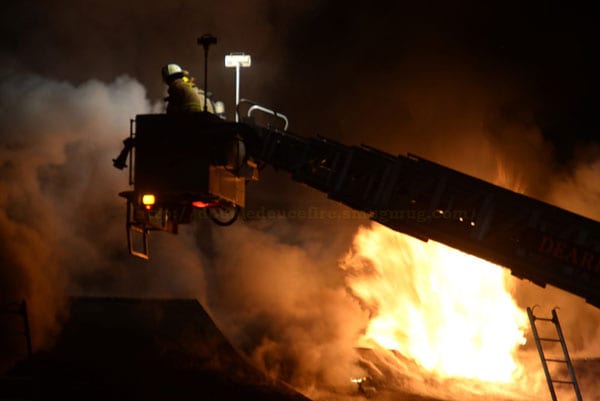 Photo by Ian Kushnir
A firefighter helps extinguish the blaze at the Motown Inn and Suites, 17255 Raupp Road in Melvindale March 26.