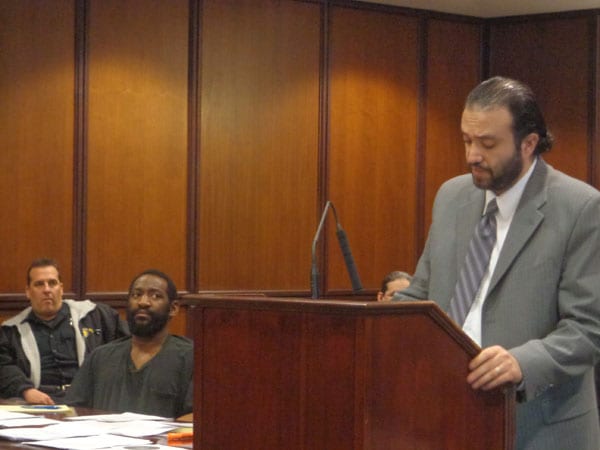 Photo by Bob Oliver
Kevin Bright Jr. (second from left) listens as attorney Nijad Mehanna (right) argues for the dismissal of the charges against him to 19th District Court Judge Sam Salamey Friday. Bright is facing two felony charges stemming from online threats made against Mt. Moriah Church of God Holiness in February. He was bound over to Wayne County Circuit Court for trial.

By BOB OLIVER
Times-Herald Newspapers
DEARBORN — The Detroit man who allegedly made online threats against a Dearborn church has been bound over for trial in Wayne County Circuit Court.

Kevin Bright Jr., 30, appeared before 19th District Court Judge Sam Salamey Friday for a preliminary examination of the evidence against him, and after hearing testimony from two witnesses and arguments from the defense and prosecution, Salamey concluded that there was enough evidence to bind Bright over to circuit court.

Bond was continued at $40,000, 10 percent with a condition of a GPS tether upon release.

Bright is charged with making a false report or threat of terrorism and use of a computer to commit a crime after making threats on Facebook against Mt. Moriah Church of God Holiness, 7350 Chase, in Dearborn.

In the Facebook post, Bright allegedly wrote that he was “coming to Mt. Moriah with a pistol” and that all he wanted to do was “testify.”

It also stated that he “carried a lot of demons” and that he had been trying to “check out” for the last few days.

An acquaintance of Bright testified in court that she had seen the posting and contacted friends who regularly attended the church.

She also said her initial fear was that Bright intended to hurt himself but she still felt that she had to notify people affiliated with the church.

The matter was brought to the attention of church leaders, who cancelled the Feb. 9 services and notified police.

Bright, a former Mt. Moriah parishioner, was arrested without incident by the Dearborn Police Special Operations Unit Feb. 11 following an investigation into the threats.

Bright’s attorney, Nijad Mehanna, argued that the charges should be dismissed because the post makes no specific threats against parishioners, but Salamey did not agree.