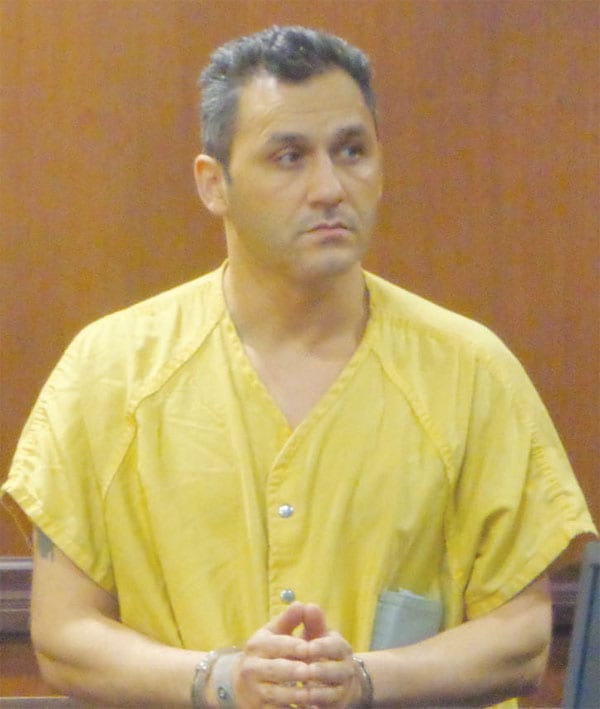 Photo by Bob Oliver
McCollough-Unis assistant principal Fady Soueidan appeared before 19th District Court Judge Sam Salamey Friday for a preliminary examination of the evidence against him but it was adjourned until next month. Soueidan is charged with home invasion first degree, larceny in a building, aggravated stalking and domestic violence assault and battery in Dearborn. He is also facing charges in 18th District Court in Westland for home invasion first degree and interfering with a crime report.

By BOB OLIVER
Times-Herald Newspapers
DEARBORN — The McCollough-Unis assistant principal facing felony charged in two separate cases has had the preliminary examination of the evidence against him postponed until next month.

Fady Soueidan, 42, appeared before 19th District Judge Sam Salamey for a preliminary exam Friday but his attorney requested additional time to review the discovery evidence in the case.

The examination now is scheduled for 9 a.m. May 16 before Salamey.

Soueidan is charged with home invasion first degree, larceny in a building, aggravated stalking and domestic violence assault and battery.

The first three counts are felonies with maximum penalties of 20, 4 and 5 years, respectively. The domestic violence charge is a misdemeanor with a penalty of a maximum of 93 days in jail.

Soueidan remains in custody but bond was continued at $100,000 cash/surety with conditions that upon release the defendant must wear a GPS tether and not make contact with his wife or family.

Salamey ordered Soueidan to turn in his keys to McCollough-Unis during his arraignment March 25 and he is currently suspended from his position with the Dearborn Public Schools.

It is alleged that at 11 p.m. March 22 Soueidan violated a personal protection order his wife had obtained against him by going to their house on Hampshire Court and physically assaulting her before stealing her cell phone.

The PPO had been filed against Soueidan on March 18.

Police responded to an emergency call of family trouble at the residence and arrested Soueidan without incident.

In the other case, it is alleged that at 8:15 p.m. March 14 Soueidan went to an apartment 36000 block of McKinley in Westland to visit a woman he was acquainted with and while there kicked in the front door and stole the woman’s cell phone.

He was arraigned before 18th District Court Judge Judge Sandra Cicirelli three days later on the charges of home invasion first degree and interfering with a crime report.

The maximum penalty for home invasion first degree is 20 years while the interfering charge is a misdemeanor with a penalty of one year in prison.

A preliminary exam against Soueidan in that case is scheduled for 9 a.m. Thursday before Cicirelli.
(Bob Oliver can be reached at [email protected])