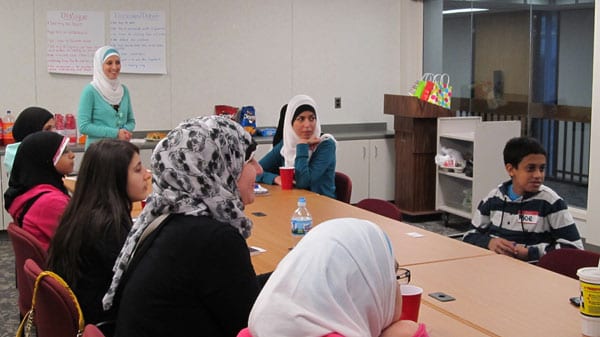 Photo by Sue Suchyta
Anisa Sahoubah (third from left), ACCESS Youth and Education Department director, co-leads Muslim Voices, a reading and discussion program for 14- to 17-year-olds on April 1 at Henry Ford Centennial Library that explores what it is like to be young and Muslim in the 21st century. Teen participants include Abeer Monssar (left), 14; Nada Alhamdi, 15; Halla Kadouh (fourth from left), 16; Alia Seblini, 14; Alyiah Albonijim, 16; Noor Saad, 14; and Mohamed Abdulla, 14, all of Dearborn.

By SUE SUCHYTA
Times-Herald Newspapers
DEARBORN – Because Anisa Sahoubah did not discover Arab American Muslim characters in fiction when she was growing up, she finds the books and dialogue offered by Muslim Voices encouraging and exciting.

Muslim Voices, a pilot program for children ages 14 to 17, is a reading and discussion series that explores what it is like to be young and Muslim in the 2stt century.

“I know growing up I did not see myself as an Arab American Muslim woman reflected in literature,” said Sahoubah, director of the youth and education department at the Arab Community Center for Economic and Social Services. “It was probably out there, but it is not anything that I was exposed to.”

“This program also presents the opportunity to spotlight just how diverse the Muslim experience is,” Rowan said. “Muslim experience and culture varies widely from country to country and family to family. It is important for young people, Muslim and non-Muslim alike, to be aware of this diversity as a way to promote understanding and avoid stereotypes.”

The selection of the Dearborn Public Library as a site for the new program follows their successful past participation in Muslim Journeys, an adult program addressing both the need and the desire of the American public for trustworthy and accessible resources about Muslim beliefs and practices, and the cultural heritage associated with Islamic civilizations.

The first session, held April 1 at HFCL, discussed Marina Budhos’ “Ask Me No Questions.” Amjed Qamar’s “Beneath My Mother’s Feet” was scheduled April 15, with Deborah Ellis’ “No Safe Place” planned for April 29, and with a May 13 closing session for Moustafa Bayoumi’s “How Does It Feel to Be a Problem?”

The books focus on two themes, courage and community, with two of the books featuring female main characters and two with male protagonists.

The pilot program, with Dearborn one of four initial trial sites nationwide, encourages teens from any faith and cultural background to participate to learn more about their neighbors and their culture, as well as their perspective.

Thirteen teens enrolled in the pilot program at HFCL, and 11 attended the initial session, which included food and icebreaker games as well as a discussion of the first book.

“I am also interested and excited about the process of dialogue, working with youth to teach them how to have healthy dialogue,” Sahoubah said. “It is not necessarily about winning an argument or trying to convince someone of your viewpoint, but just to share ideas and explore some of the commonalities, dispel some stereotypes, and do it in an open, honest, respectful way.”

Alyiah Albonijim, 16, an avid reader, said she enrolled in Muslim Voices because she heard it was an amazing program, and it would open up her mind to the different perspectives of Muslim people living (in Dearborn).

She thought the first book was a good read.

She said she plans to recommend the program to her friends.

Mohamed Abdulla, 14, admitted he does not read as much as he should, and joining the program was a step toward his goal to read more and become more involved in activities outside of school.

He said he wants to read more about his religion and culture, and enjoyed the Budhos book.

“It’s a very nice book,” Abdulla said. “It’s cool what they had to go through, and the processes, and what everyone had to do.”

Abeer Monssar, 14, said she joined the program to read more and gain courage.

She said she admired the courage of the female protagonist, Nadira, who helped win her father’s release from a detention center for illegal immigrants.

“This happens to a lot of people, and (my friends) need to understand why,” Monssar said. “It helps them understand what is going on.”

Rowan said one goal of the program is to enable Muslim teens to see themselves and their shared stories and experiences in print that other teens can read. Another goal is to get teens into the library and get them to read, make connections and talk to each other about issues.

“It is all these years after 9/11, but there is always room, there is always space for dialogue and understanding and getting to know each other and making things work,” Rowan said. “(Making) relationships work, at the teen level all the way up to your adult life.”