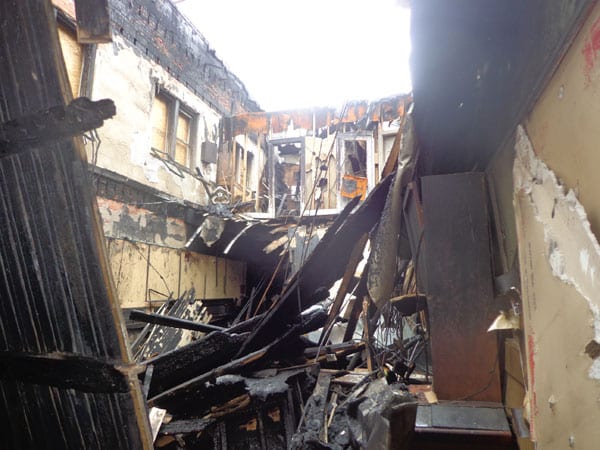 Photo by Bob Oliver
The outside walls and rubble are all that remains of Howells Bar and Grill after a fire April 25. The fire also damaged the main water line into the building, causing city employees to have to pump several feet of water out of the basement. Neighboring businesses Sophia’s Giftique and Village Barbers & Co. also were destroyed or damaged in the blaze. The Dearborn Fire Department is investigating the cause of the blaze.

By BOB OLIVER
Times-Herald Newspapers
DEARBORN — Three west end businesses were damaged by an extensive fire April 25, but they weren’t the only victims.

Howells Bar and Grill, Sophia’s Giftique and Village Barbers & Co., which share a building complex at the corner of Mason Street and West Village Road, were all damaged in the blaze; but above the businesses were lofts, two of which were in use by local artists Janet Kondziela and Kathleen O’Connell.

“We had been above Howells and Sophia’s for the last four years,” O’Connell said. “We each had our own work and break areas and an exhibition space.”

O’Connell said the lofts were an ideal place to work and create.

“It was our ‘happy place,'” O’Connell said. “It had high ceilings, good lighting, good lighting and good karma. The first time I walked in I said, ‘This is it!'”

Kondziela said both she and O’Connell had been working in the lofts earlier in the week and that each were preparing either new artwork or pieces for upcoming workshops.

The fire destroyed everything in the lofts.

“Finished works, sketches, commissioned pieces, everything that was in the building was destroyed,” Kondziela said. “It was every artist’s worst nightmare.”

She estimated that over 200 pieces of finished artwork between the two artists were in the exhibition space.

O’Connell said losses also included everything from supplies like paints and brushes to photographs that cannot be replaced.

“It’s unbelievable,” O’Connell said. “You never expect something like this will happen.”

Kondziela said the two are still working with their insurance providers about the incident and are considering getting another loft or space to continue working in the future, but that it is a difficult decision to make.

“Creating art is such an emotional process,” Kondziela said. “It can be really difficult to find a space that will be inspiring and a comfortable place to work in.”

She also said the support from the community has helped get through the tragedy.

“People have been incredibly supportive, and it really means a lot to us,” Kondziela said. “Other artists have offered us supplies and we’ve been contacted through emails and Facebook by different community members. We’re really blessed and lucky.”

The fire at the building complex was reported to the Fire Department about 7:30 p.m.

“In the Howells bar and Sophia’s boutique the first and second floors and the roofs are collapsed,” Murray said. “We’re checking the stability of the walls now, but there’s nothing really tying them together without the walls or ceiling.”

He added that contractors are currently assessing the stability of the building before the Fire Department can continue their investigation into the cause and origin of the fire.

Murray said the preliminary investigation indicates that the fire started in the basement of the building complex.

“Because of the large amount of fire we had some serious concerns that it would jump over to some of the adjacent structures,” Murray said. “So we evacuated the neighboring buildings and set up our ladder truck to provide an aerial master stream to keep the fire contained in the one building.”

No injuries were reported from the blaze and surrounding structures didn’t report any problems other than smoke damage.

Murray said firefighters were at the scene until about 7 a.m.

Howells had been open since the 1940s, a longtime business in the west end, while Sophia’s Giftique and Village Barbers were newer.

No official word has been released by the owners of Howells or Sophia’s regarding future plans, but Village owner Derek Seed said he plans to continue working in west Dearborn.