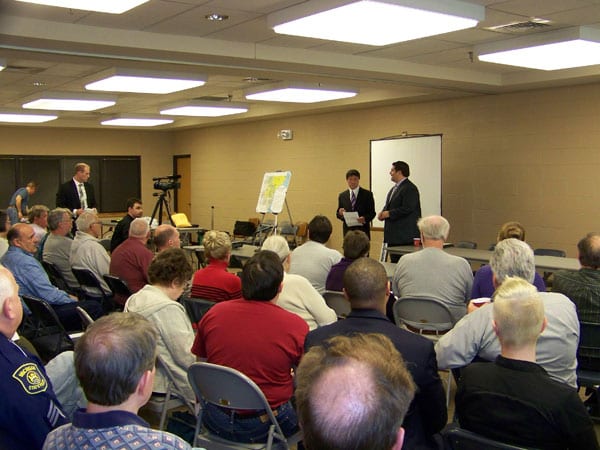 By JAMES MITCHELL
Sunday Times Newspapers
SOUTHGATE – It’s no secret that Michigan’s roads have seen better days, and statistics presented during a town hall forum last week confirmed that motorists face more obstacles than have been seen in many years.

Mayor Joseph Kuspa said the informational session held Tuesday may not have resulted in answers, but helped to clarify the state of road-repair responsibilities.

“The whole purpose as to assess were the conditions are right now,” Kuspa said, “and also give a better understanding of how repairs are currently funded.”

The town hall meeting at Southgate Veterans Memorial Library – convened to address all areas of “transportation issues” – was hosted by state Sen. Hoon-Yung Hopgood (D-Taylor) and state Rep. Andrew Kandrevas (D-Southgate). Panelists from the Michigan Department of Transportation, Southeast Michigan Council of Government and state and county road agencies presented facts and figures that clarified what residents have long known.

Since 2004 the percentage of state roads that qualified as “poor” – when broken down into designations of “good,” “fair” and “poor” – has tripled. More than 50 percent of the streets rated at the low end of the status scale.

What isn’t generally understood by the tax-paying public is which government agency has the responsibility to repair crumbling roads. Kuspa said the town hall forum’s primary agenda was to clarify who provides the funding for which roads.

“In that sense they did a good job explaining to community members how road repairs are funded, what entities are responsible,” Kuspa said.

The majority of funding for transportation costs comes from three sources: state gas tax of 19 cents per gallon, state vehicle registration fees, and federal gas tax of 18.4 cents per gallon. While material and labor costs have risen each year, the state’s 19-cents-per-gallon tax has remained the same since 1997, regardless of the price of a gallon of gasoline. Transportation officials said fewer gallons of gas are sold when the cost per gallon increases.

One solution put forth Tuesday was to increase the gas tax, although other states – and elsewhere in Michigan – other avenues have been explored, often with considerable success. Oregon, for example, charges a mileage-based fee, Ohio issued bonds to raise $1 billion for road repairs, and several other state programs were described which have added billions of dollars to road funding.

“The city has assessed themselves a special millage for roads,” Kuspa said. “Over the last 10, 12 years they’ve re-approved that millage two additional times.”

Benefits from that local millage have been seen in recent weeks with an ambitious pothole-repair program that uses a longer-lasting solution than the traditional “cold patch” approach. Kuspa said that at its core, taxpayers see the evidence of a worthwhile investment.

“It seems to have more longevity to it,” Kuspa said of the methodology. “We only knew this by investigating techniques. This is more permanent.”

“There are some frustrations. I don’t think the average taxpayer feels a legitimate return on investment,” Kuspa said. “Whether it’s the state or county or whoever’s responsible, (Southgate) has been successful, but are we doing enough to invest in technology?”

Whether a local, county or state road, the condition of Michigan streets has become prominent and the forum included a breakdown of projects slated for 2014. Residents have seen an ambitious “Pothole Blitz” campaign to address primarily local streets that were badly pock-marked by the harshest winter in state history, and large-scale projects include the I-96 reconstruction that will continue through late summer.

The average taxpayer is unaware of which budget addresses particular road issues, but the consensus opinion was made clear Tuesday that too many vehicles have suffered too much tire and wheel damage when traveling crumbling roads.

“It was a good informational piece,” Kuspa said. “I think they need to do more of that, but before we talk about revenue we have to talk about efficiencies, both administrative and with technology.

“People are looking for long-term answers as opposed to doing something and then doing it again in two or three
years. People don’t always understand who’s responsible for what – but they don’t need to. They just want to get from point A to point B.”