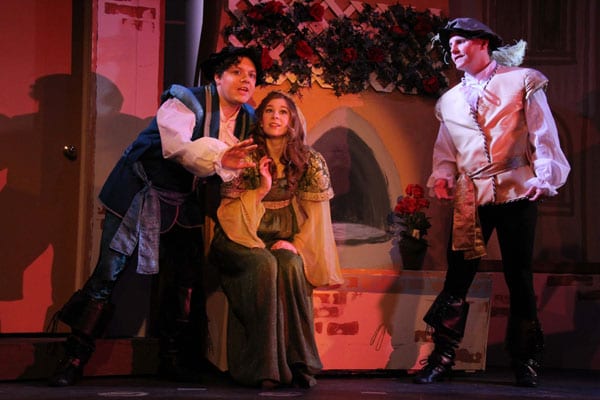 Photo by Marni Hack
Dearborn residents James Mayne (left) as Lucentio, Meg Kisch as Bianca and Michael Belli as Gremio in the musical “Kiss Me Kate,” through May 25, at the Players Guild of Dearborn. For tickets or more information, call 313 561-TKTS or go to www.playersguildofdearborn.org. 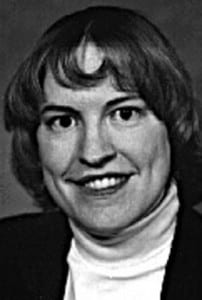 By SUE SUCHYTA
Summer theater productions will give local teens a chance to shine in the spotlight as the Dearborn Recreation & Parks Department sponsors, “Shrek – the Musical” and the Players Guild of Dearborn presents “Into the Woods Jr.” with a teen cast.

Cynthia Frabutt, who is directing “Shrek,” said she looks forward to seeing young actors return each year as well as adding new teens to each summer show.

“I am ecstatic to be able to cast some major talent for this production along with some new faces,” Frabutt said. “The older teens have always been great role models for the youth. Some returning actors from previous summer productions have stepped into the mentoring position. My goal is to keep the cycle going.”

The show runs July 11 to 13 at the Ford Community & Performing Arts Center, 15801 Michigan Ave. in Dearborn.

Frabutt said she is excited to start “Shrek” rehearsals.

“The cast is full of talent and enthusiasm,” Frabutt said. “I love to see their journey through to the final performances, and to see how happy they are when friends and family acknowledge with accolades.”

She said she is honored to be sharing the summer spotlight with “Charlotte’s Web,” “Into the Woods Jr.,” and Shakespeare’s “A Midsummer’s Night’s Dream,” which are being produced this summer at the Players Guild.

Frabutt said she also is pleased with her returning adult production team, which includes Jeannette Capote as choreographer, Kurt Frank as musical director and Margaret Charara as costume coordinator.

Kyle Tillman, 19, and Bilal Hammoud, 17, both of Dearborn, will alternate in the role of Donkey and the Big Bad Wolf.

Michael Suchyta, 18, of Dearborn and Alek Papanastasapoulos, 15, of Canton Township, will share the role of Lord Farquaad and Thelonios.

Rachel Ogger, 17, of Livonia plays Fiona, with Amanda Chatila, 16, of Dearborn Heights singing the role of the dragon.

The Dragonettes include Dearborn residents Olivia Carstenson, 15, and Abby Goddard, 15.

Other character roles include Dearborn residents Katie Garber, 13, as Gingy; Connor Kozlowski, 12, as the Cricket and Puss N Boots; Noah Goddard, 13, as Papa Bear; Sarah Walker, 11, as Goldilocks; and Tyler Katona, 19, as the Captain of the Guards.

Madison Ganzak, 11, of Dearborn Heights and Courtney Perttula, 10, of Allen Park share the role of young Fiona, with Abbi Balaka, 16, and Kayla Katona, 14, both of Dearborn, sharing the role of teen Fiona.

Other Dearborn residents in featured roles include Jazzmin Sharara, 17, as the Mad Hatter; Mikayla Capote, 15, as the Wicked Witch; Gabriella Greco, 9, as the Ugly Duckling; Brendan Hay, 13, as Peter Pan; Alyssa Dickieson, 9, as Tinkerbell; Olivia Kirk, 10, as Alice; Jemmilie Swift, 13, as Red Riding Hood; Kristin Thompson, 15, as Cinderella; and Sarah Randall, 15, and Suchyta alternating as the dancing Pied Piper.

Dearborn Heights residents in featured roles include Amelia Tennant, 13, as the White Rabbit, Allie Thornton, 9, and Evan Thornton, 6, as the Dish and the Spoon, Rebekah Preiss, 16, as Snow White and Erin Preiss, 6, as Thumbelina.

PGD ANNOUNCES ‘INTO THE WOODS JR.’ CAST
Director Greg Viscomi of Dearborn announced the summer teen cast for the Players Guild of Dearborn production of “Into the Woods Jr.” last week.

The fractured fairy tale, with music and lyrics by Stephen Sondheim and book by James Lapine, is based on classic fairy tales and explores what really happens after the “happily ever after” is granted.

Tim Carney of Livonia is the show’s producer, with Dearborn residents Julie Malloy as musical director, Suzy Greimel as choreographer, Dave Woods as the stage manager and Diane Kaplan as the costumer.

Dearborn residents in the cast include Scout Greimel, 14, as the Narrator; Joey Garza, 11, and Peter Moore, 12, sharing the role of Jack; Ben Timpf, 18, as the Baker; and Joanna Frantz, 18, as Cinderella’s stepmother.

Other Dearborn cast members include Heather Slanac, 14, as Lucinda, a stepsister; Lia Bertucci, 15, as Cinderella’s mother and Granny; Nathaniel Booth, 18, as the Wolf; and Emma Scott, 15, as Rapunzel.

Other Dearborn residents include Alec Sheldon, 16, as Cinderella’s Prince; Adriana Viscomi, 11, As Milky White; Mary Charara, 18, and Madelyn Kaplan, 15, sharing the role of Cinderella; Casey Irwin, 17, as Jack’s mother; Marjorie Gaber, 16, as the Baker’s wife; Maria Viscomi, 15, double cast as the Witch; Omar Alami, 15, as the Mysterious Man; and Henry Bierman, 15, as the Steward.

Other cast members include Quinn Higgins, 13, of Northville as Florinda, one of the stepsisters; Hailey Hayward, 13, of Wayne and Riley Klauza, 14, of New Boston sharing the role of Little Red Riding Hood; Ian Haas, 14, of Inkster as Cinderella’s father; Jennifer Lessnau, 16, of Livonia as one of the double-cast witches; and William Dunn, 17, of Taylor as Rapunzel’s prince.

YOUTH SOUGHT FOR FESTIVAL WORKSHOPS, PERFORMANCES
The Motor City Youth Theatre, 27555 Grantland in Livonia, invites youth ages 5 to 18 to enroll in workshops, held July 7 to 25, for one to three weeks, either half or full-day, that culminate in a summer medieval and renaissance festival.