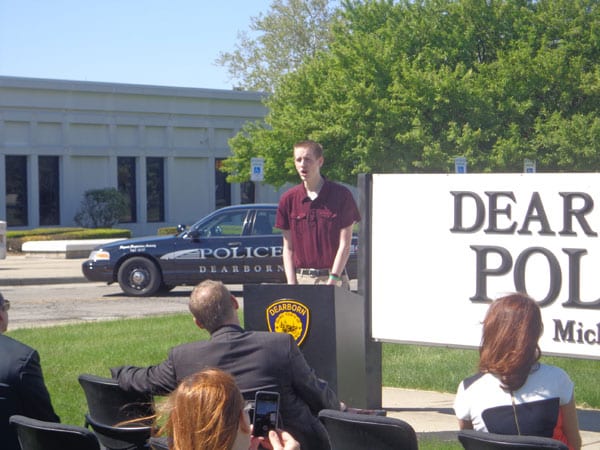 Photo by Bob Oliver
Divine Child High School junior Sean Vichinsky speaks during the Dearborn Police Department’s “Safe Driving Initiative,” held in front of the DPD Thursday. The event was held to highlight safe driving habits for young drivers before local schools get out for the summer and more inexperienced drivers are on the roads.

By BOB OLIVER
Times-Herald Newspapers
DEARBORN — With the summer approaching, the Dearborn Police Department is reminding drivers to be safe on the roads.

At an event held in front of the DPD Thursday, several groups including Mothers Against Drunk Driving, AAA MIchigan, Ford Motor Co’s. “Driving Skills For LIfe” program and local high schools joined police in a discussion about how to reduce traffic accidents, especially those caused by distracted driving.

“We take driver safety very seriously so we want to highlight measures to help keep our roads safe for everyone,” Police Chief Ronald Haddad said.

Haddad said drivers in their 20s make up 27 percent of the distracted drivers in fatal crashes.

“This is something we can change and we are trying to change,” Haddad said.

Sgt. Stephen White said police are pushing to get the word out just before school is out for summer and more inexperienced drivers are on the roads.

“We want get the message out to both parents and students themselves,” White said. “We want these students to develop good habits now and not let themselves get distracted when driving.”

White said the smashed vehicle on the lawn in front of the DPD will remain in place temporarily as a reminder to all drivers to handle their vehicles safely.

Divine Child High School junior Sean Vichinsky said that as a student he is very familiar with the numerous things that can distract a driver, but that it’s important just to stay focused behind the wheel.

“The average time that a person’s eyes are off the road when texting is 5 seconds and it is estimated that over 600,000 use their phones when driving,” Vichinsky said. “It’s not worth it, especially because you could be sending out a simple message like ‘What’s for dinner?’ and then crash and that’s the last thing you ever do.”

“I think that too many people take their life and the lives of others for granted when they get behind the wheel,” Naser said.

Ford Motor Co. Driving Skills for Life Program Manager Jim Graham said between 5,000 and 6,000 teens and young adults are killed every year in traffic accidents with motor vehicle crashes being the leading cause of death among individuals that age in the United States.

“Some easy tips to immediately reduce your risk of an accident as an inexperienced driver are to buckle your seatbelt, slow down by 5 mph and limit the number of passengers in the vehicle with you because they can be a huge distraction,” Graham said. “We have to reduce the number of accidents, especially with young drivers, and these are easy tips to save lives.”