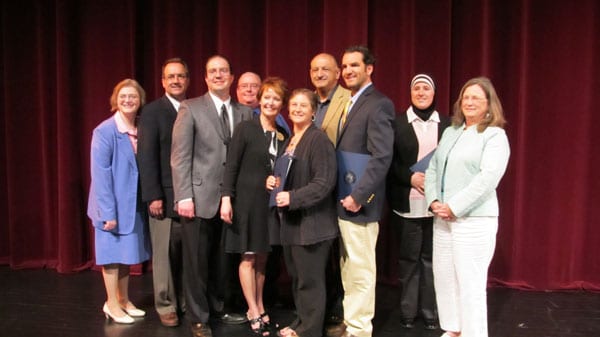 By SUE SUCHYTA
Times-Herald Newspapers
DEARBORN – When nearly 1,000 students write essays not assigned by their teachers, but praising them, the result is hundreds of nominations for the Alberta Muirhead Teacher of the Year Awards.

The 2014 awards, sponsored by the Dearborn Area Chamber of Commerce and presented by the LaFontaine Automotive Group, honored teachers in four grade categories May 14 at the Ford Community & Performing Arts Center.

This year’s winners, by category, were:
• Preschool to second grade: Mary Timpf of Geer Park Elementary, nominated by Nadia Mrove.

Currently a government teacher at Fordson, Memminger previously taught English and social studies at Stout Middle School and Dearborn High School. She has 10 years with DPS, and substitute taught in another district before then.

Chbeir said Memminger pushes students to participate in class and to move outside their comfort zones. She said Memminger encouraged her to apply to Harvard, where she was accepted, and will start classes in the fall.

“She really cares about kids’ success more than others,” Chbeir said. “It is also really cool that she brings experience to the content area. She is always talking about her previous experiences at the polls or campaigns she has run before.”

She said Memminger’s classes are interesting, and are more than just meeting the benchmarks and going home and doing the homework. She encourages students to learn the content and explore subjects more on their own.

Chbeir said Memminger also encourages her students to be true to their own personalities.

“Let’s say you are a quirky kid, don’t really fit into the crew,” Chbeir said. “She encourages you to be yourself.”

Recognizing students individuality and making time to answer their questions is a trait exhibited by Lazar. Abdallah, 14, has been in Lazar’s classes for sixth, seventh and eighth grades.

“He’s a gym teacher, but he relates to everything,” Abdallah said. “If I ask him a question he always has answers. It is always a positive answer. It’s never anything ridiculous.”

He said the way Lazar treats students is amazing.

“If there is an issue, he solves it,” Abdallah said. “Just the way that he talks to us sometimes makes us think different. He is different from any other teacher that I have ever had.”

Lazar, who also prepares future teachers at Wayne State University, reminds his college students that they will have a chance to make a difference in children’s lives.

“I said to them, you have to remember this is why you get into teaching,” Lazar said. “In other words, you are the reason some kids will come to school, and that’s it. Here I am, a week later, living the experience. It is very flattering, humbling, honoring. It is just great.”

Although he has been teaching for DPS for 15 years, Lazar said he has been with DPS since he was 5 years old, and is a “home grown” product of the school system.

“I have four degrees: a bachelor’s, two master’s and a doctorate, and I think that is all possible from what was instilled from the teachers that I had back then,” Lazar said. “So growing up here, being with the school system all those years and living in this community really is powerful. I like the fact that I am giving back.”

He went to Howard Elementary, Bryant Middle School and Dearborn High School. His undergraduate degree is a double major in psychology and education from the University of Michigan-Dearborn. He also has a master’s degree in public administration from U of M, a master’s degree from WSU in kinesiology, and a doctorate in education leadership and policy studies with a minor in kinesiology from WSU.

He said Abdallah’s nomination humbled and honored him.

“The best thing that can ever happen to you is to make a meaningful difference in a student’s life,” Lazar said.

Timpf, a 28-year teaching veteran who teaches a first- and second-grade split class, said she felt honored by the award, and Mrove’s nomination meant a lot to her.

“I feel like I am a representative of so many wonderful teachers, because anybody could be up here,” Timpf said. “And I am just extremely lucky and fortunate and blessed to be the one they chose this year.”

She said laughing and being happy is what her young students enjoy the most.

“I tell my student teachers that you are in show business,” Timpf said. “You have to keep them laughing and interested and you can do anything you want.”

Hamid said after the ceremony she was still in shock over receiving the award. She was a paraprofessional for 17 years before becoming a teacher two years ago.

“It was a humbling experience, such an honor,” Hamid said. “I treat (my students) like my own kids, and that really struck me, because you know you say a lot of things in class and I never realized that they really knew what that meant.”

She said she spent time in the morning before school helping Sleiman.

“She worked hard,” Hamid said. “Seeing her progress inspired me. It was the most beautiful thing. It was a reward of being a teacher. This is why we go into teaching.”