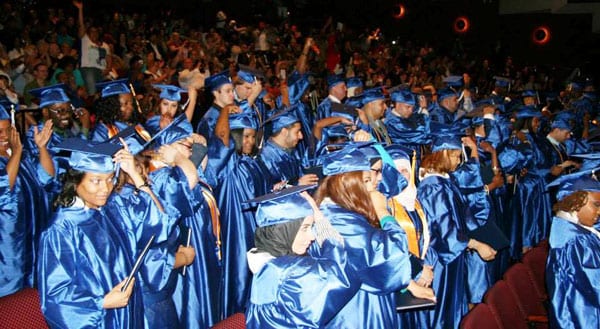 DEARBORN — Henry Ford College celebrated commencement exercises under its new name May 10 at the Ford Community & Performing Arts Center as the institution celebrated the commitment and accomplishments of its graduating students. More than 382 students participated.

HFC held two ceremonies for the occasion, at 10 a.m. and 1:30 p.m. Hundreds of family members and friends joined their loved ones during the ceremonies. During the 2013-14 academic year, more than 1,800 students graduated from HFC’s degree and certificate programs.

“I take great pride in the annual commencement ceremony, which marks an important point in the academic careers and lives of all students,” HFC President Stan Jensen said. “Many students must juggle responsibilities as students, parents and employees while working toward a better tomorrow through higher education. We’re very happy to celebrate their success and look forward to hearing of their contributions in the years ahead.”

Liebold began his career in public service in 1968 and is the founder/president of The Liebold Group LLC. From 1991 to 2008, he served as president of the Michigan Colleges Foundation and led the organization in its most successful period in its 65-year history. Under his leadership, the MCF raised more than $32 million, doubled its endowments, and established renowned scholarship programs with many of Michigan’s leading corporations and foundations.

In recognition of his service, the MCF Board of Trustees named Liebold president emeritus and established an endowed scholarship in his name.

From 1983 to 1991, he was a special assistant and cabinet secretary to Gov. Jim Blanchard, where he raised a record $1.7 million for charitable and community service agencies as chairman of the first Michigan State Employees Combined Campaign.

Liebold was instrumental in launching the Detroit Bridge Program, a pre-college initiative to boost urban high school graduation rates. From 2004 to 2007, he served as vice chairman and presiding officer of the Foundation for Independent Higher Education. Currently, he is an adjunct professor of political science at Oakland Community College.

A native of Dearborn, Liebold graduated from Dearborn High School in 1966. He attended Henry Ford Community College from 1967 to 1968 before leaving to teach English to prepare students for the GED exam with Vista, the domestic peace corps, for two years. He returned to HFCC in 1970 before transferring to Eastern Michigan University, which he attended for one year.

“The 1960s was a difficult time for our nation and many of us individually,” Liebold said. “The Vietnam War, the assassinations of Martin Luther King Jr. and Robert F. Kennedy and the emergence of the counterculture caused many of us graduating from high school to make difficult personal decisions. Fortunately, (HFCC) was there to provide stability and a chance to build the foundation for successful lives and careers.”

Dingell is the founder/president of D2 Strategies, the chair of the Manufacturing Initiative of the American Automotive Policy Council, and chairwoman of the Wayne State University Board of Governors. She is an active civic and community leader in Michigan and Washington, D.C., as well as a recognized national advocate for women and children.