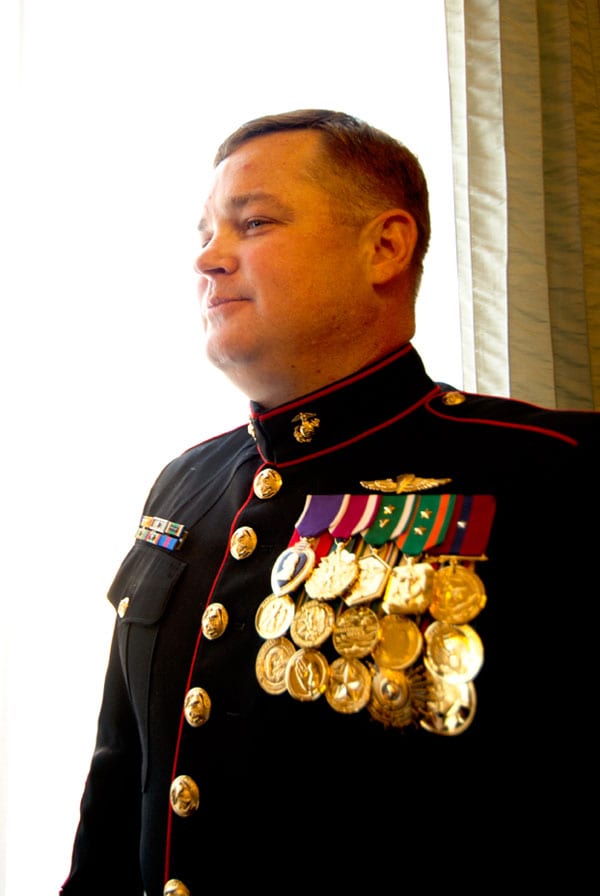 Photo courtesy of the city of Dearborn
Retired U.S. Marine Master Sgt. William “Spanky” Gibson Jr., the first above the knee amputee to return to military service in a combat area, is the grand marshal of the Dearborn Memorial Day Parade May 26.

DEARBORN – The city’s 90th annual Memorial Day Parade, one of the largest in the United States, presents a daylong tribute to the modern soldier.

Organized each year by the Dearborn Allied War Veterans Council and the city, the parade includes school bands, community organizations, flyovers of historic aircraft, and hundreds of veterans.

Activities begin with a 9:40 a.m. military funeral procession along Michigan Avenue honoring veterans who died without resources and whose cremains have been stored for years in Michigan funeral homes.

At 10 a.m. the parade will travel this same route along Michigan Avenue from Greenfield to Schaefer, ending at City Hall.

Following the parade, the public is invited to stay at City Hall for a noon remembrance ceremony at the War Memorial. It will include a military funeral ritual and music by the Dearborn High School marching band and others.

The noon ceremony keynote address will be given by the grand marshal, William “Spanky” Gibson Jr., a retired Marine master sergeant, who was the first full leg amputee to return to combat.

As a wounded warrior he has competed in triathlons, marathons, half ironman races and is a member of the Wounded Warrior Amputee softball team.

New this year will be additional activities in City Hall Park and along Maple Street until 3 p.m.

Food will be available for purchase from food trucks, there will be free children’s activities, an art installation, and military vehicles and displays.

In addition, there will be music 1 to 3 p.m. from the Platinum Entertainment and Karaoke by April Williams.

Among the displays:
• Walk a Mile in Her Boots art installation features combat boots decorated by female veterans to reflect their military experience and raise awareness about issues they face.

• Mobile Vet Center offers information and is used as a mobile crisis counseling center. Veterans are encouraged to talk about their work in combat.

Food will be available for purchase between 10 a.m. till 3 p.m. from:

• Mean Weenie – Hot dogs with a number of cool twists

Children will enjoy a face painter and balloon artist from 11 a.m. to 3 p.m. There is no charge.

“On Memorial Day, we remember those we lost in war and honor the sacrifice of their lives and that of their families,” Dlugokenski said. “That holds for all time. I want people to know these men and women – those that didn’t come back and those that remain.

“There are so many people who’ve faced huge challenges in the last decade of war and they’ve succeeded. I want to honor and encourage them all and promise them they will be well treated in Dearborn.I want to celebrate the human spirit.”

The parade and special events are made possible by Atlas Oil, Dearborn Federal Savings Bank, the East Dearborn Downtown Development Authority, the Foundation for American Veterans, Ford Motor Co., Kroger at Michigan Avenue and Greenfield, and contributions by the participating community groups.

The parade will be broadcast live on City of Dearborn Television, which is Comcast channel 12 and WOW channel 10. It can also been seen on AT&T U-verse and at www.cityofdearborn.org.

To learn more about the parade, including the parade lineup, go to
www.cityofdearborn.org and click on the U.S. Flag Memorial Day Parade button.