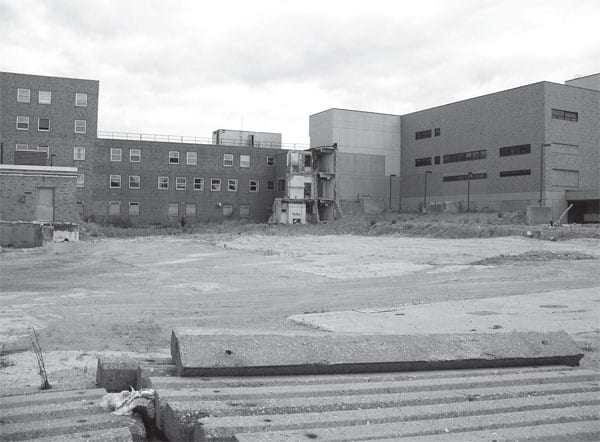 Photo by James Mitchell
Some landscaping and fence improvements have been made to the former Riverside Osteopathic Hospital property in response to residents’ concerns about blight and safety. Neighbors and city officials confirmed last week progress on the long-dormant project and expect more announcements later this month.

By JAMES MITCHELL
Sunday Times Newspapers
TRENTON — Residents have long grown weary of plans and projections for the former Riverside Hospital grounds and building, and by all accounts tempers flared a few weeks ago during a city hall meeting.

“A lot has happened since that meeting,” LeFevre said.

LeFevre and city officials, however, agreed that more and continued developments are needed, and promises made by property owner Dr. Iqbal Nasir would be closely monitored.

Last month’s meeting featured a laundry list of residents’ concerns — long-aired issues of safety and blight as the dormant facility had become both an eyesore and magnet for vandalism and other problems.

“The complaints they’ve had have been very valid,” LeFevre told Nasir.

Earlier this year Nasir presented his plan to transform the facility — closed since 2002 — into a medical mall. The former osteopathic hospital was purchased by Henry Ford Health Systems in 2009; Nasir acquired the complex in 2011 and has since presented several plans that stalled.

During the prolonged inactivity, neighbors of the complex had grown increasingly frustrated at safety and health issues, including concerns of mold and asbestos in the dormant buildings.

During Wednesday’s meeting, city officials confirmed several indicators of progress, and expect more to follow. Nasir had contracted with landscapers and much of the blight and overgrown appearance at the grounds have been taken care of, security cameras will soon be installed along with lighting for parking areas, and repairs continue on the surrounding fence.

City Administrator Jim Wagner confirmed that Nasir had applied to the state for a certificate of need, and has agreed to allow inspections by city officials en route to submitting a site plan for the professional building.

Wagner said a time frame has been established for benchmarks of progress, and that schedule is no longer negotiable or subject to change.

“There are penalties to not meeting deadlines,” Wagner said.

Inspections are set to begin this week which Wagner said will provide the city with a checklist of questions to be asked and actions to be taken by Nasir. A deadline of Aug. 14 has been set for Nasir to receive the city’s approval for the first phase.

“I really believe we can make this work,” LeFevre said. “If (Nasir) can keep showing us things happening, and talk to the residents.”