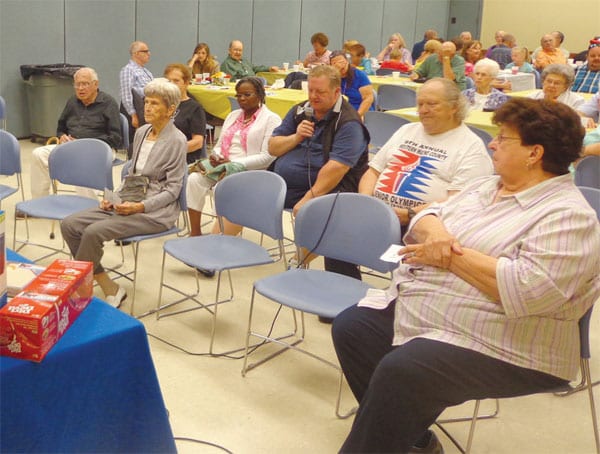 Photo by Bob Oliver
Grosse Ile Township resident John Conroy (third from right) ponders the correct spelling of a word during the Wayne County Senior Spell-Off July 16. Conroy finished first out of the 12 contestants from around the county who participated in the event, which was judged by Wayne County Department of Senior and Veteran Services Director Kevin Kelley (left).

By BOB OLIVER
Times-Herald Newspapers
DEARBORN — Resident Ed Roose was hoping for a victory at the eighth annual Wayne County Senior Spell-Off, but settled for a very respectable second place.

The event was held inside the Brownstown Senior Center, 21311 Telegraph, July 16.

Roose was one of 12 participants in the competition,
which was made up of the top finishers at each of the county’s six qualifying events held throughout
the year.

“You always know how to spell every word except the one they just gave you,” Roose said. “But I tried my best.”
Conroy said he has been taking part of the spelling contests for the last two years and that this is his first victory.

He said being able to correctly spell words was something he was taught at a young age.

“I had a teacher in elementary school that was a real stickler for spelling, so I’ve always paid attention
to it,” Conroy said. “These competitions are hard but you just take a deep breath and focus on each word.”

Conroy, who visits Dearborn often and works on the “New WHFR Journal” radio program at the Henry Ford College station WHFR-FM, said he keeps his spelling skills in shape by reading and doing crossword puzzles.

He added that he plans to continue taking part in future Spell-Off events.

Wayne County Executive Assistant Jakleen Ochalek helped organize the spelling events throughout the county and said they have been well-received in different communities since being started.

“Our seniors love the spelling bees and they enjoy
the competition,” Ochalek said. “It’s so good to get them out of the house and socializing and having fun.”

“We have a large population of seniors in Wayne County and it’s very important to keep them active and engaged,” Ficano said. “The more they get out and stay active the better they’ll be mentally and physically.”

(Bob Oliver can be reached at [email protected]
com.)