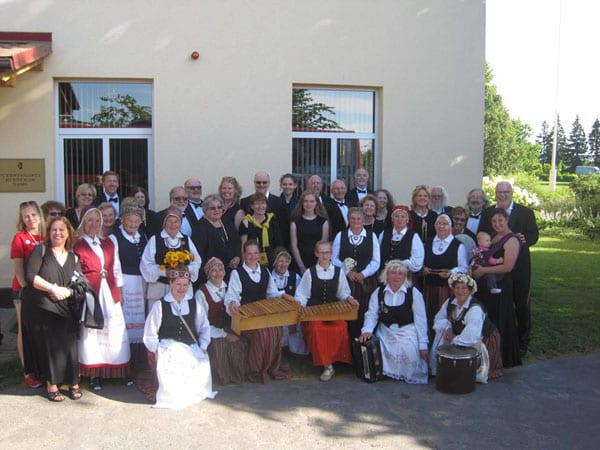 By SUE SUCHYTA
Times-Herald Newspapers
DEARBORN – Members of the Dearborn Community Chorus discovered first-hand how music is an international language when they traveled to Latvia in July to participate in the World Choir Games in Riga.

“The night we did our Friendship Concert in Pure, Latvia, we sang with a local women’s choir, a Danish high school choir and a Chinese men’s choir,” said Tara Gnau, an alto from Dearborn. “After the concert we had the best party, (with) everyone dancing and eating together. Even though we could not all communicate through the spoken word, the fun and camaraderie was very evident.”

Soprano Lorrie McVey, of Commerce Township, said the town of Pure (pronounced POOH-ruh) greeted them with a wedding-like spread of food and a mayoral welcome. After their performance, the town treated the singers to dancing and more native foods.

“It was a feast, with local beer flowing liberally from pitchers,” McVey said. “We ate, we drank and we danced. Boy did we dance.”

She said the natives taught them Latvian folk dances, and the tables were laden with homemade native dishes.

“Everyone was laughing and having fun,” McVey said. “Music is a great binder. We should use it whenever possible. It is universal and can bring us closer to peace than anything I know.”

The DCC first participated in the World Choir Games in Cincinnati in 2012 with 25 members, an experience that inspired them to return to the biennial event in 2014 in Riga.

Most DCC members left the United States on July 4, returning July 14. The group met July 5 in Helsinki, Finland, and took a ferry to Tallin, Estonia on July 6, where they sang in the United Methodist Church for the Sunday service.

Kari Safieddine, a soprano from Dearborn Heights, said her favorite part of the tour was singing in an Estonia Festival that occurs every five years for a 100,000-member audience.

“There were thousands of singers onstage,” Saffieddine said. “At the end, everyone was singing and waving flags and it was amazing to be in the middle of this. I love singing because it brings people together in such a peaceful and positive way.”

Carol Ghenic of Dearborn, an alto and 15-plus year member of the DCC, said she enjoyed this trip the most.

“We did the city of Dearborn proud by going to the World Choir Games and sharing what we know with the wonderful people there,” she said.

The DCC, founded in 1963 as one of the cultural organizations sponsored by the Recreation Department, provides an opportunity for its members to develop a strong choral repertoire and perform locally twice a year.

The group practices from 7 to 9 p.m. Tuesday nights from September to May in room F-113 in the MacKenzie Fine Arts Center at Henry Ford College, 5101 Evergreen Road.

For more information, call the Cultural Arts Division at the Ford Community and Performing Arts Center at 313 943-2350 or send an email to [email protected]

“The members of this choir strive for high-quality music-making while maintaining a sense of community and fun,” director Marcus LaPratt said.

He said singers age 16 and up are welcome, and auditions are not required.

“I would encourage anyone with an interest in singing to join our choir,” Safieddine said. “We have a great conductor and friendly choir members.”

The group also offers an opportunity to perform in Michigan or other nearby states annually, and takes optional international trips every other year.

LaPratt said about one-third of the 75-member choir participates in the international trips.

“It is not a requirement for singers to tour with our group,” LaPratt said. “It is an optional experience. Because it is an additional time commitment, and often quite costly to participate in these tours, it is not possible for all DCC members to always travel on these tours.”

He said the age of choir members who went to Latvia in July ranged from 17 to 89.

LaPratt said their repertoire on tour included a variety of Americana songs, including Broadway, folk, spirituals and other traditional selections.

During the Latvian trip, Slaber said the grand experience of the World Choir Games took second place to the friendship offered by DCC members.

“Music has always been a part of my life,” Slaber said. “Unlike other school experiences, singing holds only positive connotations for me. In a way, this was a grownup continuation of that. The preparation, the participation and performing were combined with the essence of a summer holiday, which made a fun and rich experience.”

LaPratt said there were too many memorable moments to list them all, but said the camaraderie strengthened
DCC socially and from a community standpoint.

“We are in this together,” LaPratt said. “Travel adventures (like) lost luggage, broken down buses, lost passports, trips to the hospital are par for the course when traveling with such a group.

“The positive things, (like) exploring castle ruins, hearing great musical performances, trying to speak a foreign language, being adventurous with local traditional foods, experiencing outdoor cafes and wandering around cities that are 1,000 years old will remain our great memories for many years.”